Brawl Talk news from Supercell on the next update – Brawl Stars

Everything you see in this article, you can also find it in my Youtube video that is published at the beginning of this news. SUBSCRIBE TO MY CHANNEL!!

We talked about the Brawl Stars Club Wars in an article, but it seems that Supercell has not yet started the development work of the Club Wars, indeed it does not yet know how to insert them on Brawl Stars. This was confirmed by Dani, in a TWEET reply where he confirmed that they do not yet have in mind how to do it for Club Wars, and that this mode will certainly not be included for this year. 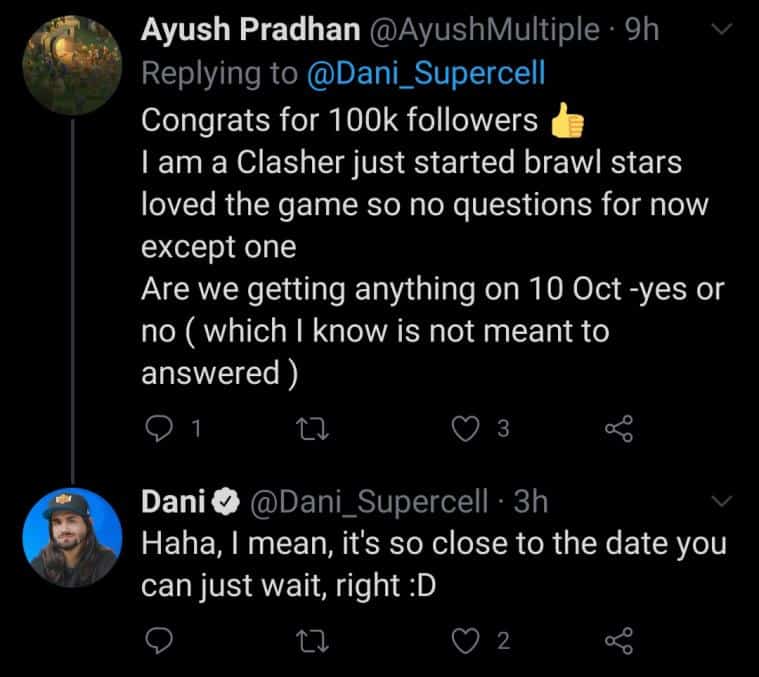 It seems that the Brawl Talk will not arrive tomorrow, as we all predicted. In fact, no PREMIERE has been posted on the official BRAWL STARS channel and above all the Brawl Talk has not yet been announced, which often happens 2 or 3 days before the Brawl Talk.

So when will Brawl Talk come out? Now it is a matter of little, says Dani in the tweet shown above, where a user “Ayush” asks if there will be something on October 10th and Dani replies that it is a date close to 10th but not October 10th. The clues don’t end there, check out this tweet:

READ  Moto G9: what we want to see

The 70-day mid-season is 35 days, now if we remove the 35 days of the mid-season from the 45 days of the remaining season, 10 days remain. These days we add them to today’s date and…. next update between October 19th and 20th! So when the Brawl Talk? In my opinion the Brawl Talk will be released on October 15th, but it is not certain that it will be released even earlier, from the 12th onwards in my opinion.

Do you have any theories too? Write them all in my latest video in the comments: COMMENT HERE

Please leave a reaction below if you liked my article and SUBSCRIBE to my Youtube channel to play with me or participate in my tournaments! Don’t forget to comment below and also in ours server Discord, to compare your ideas with other players or find new friends on eSports Mobile.

Thanks for reading and turning on eSports Mobile notifications so you can stay up to date with the latest news, tips, guides and more about Competitive Mobile Gaming!

READ  Hyper Scape is getting a tough start on Twitch