Cyworld announced a revival. It has been more than a year since the company was driven into a business closure crisis due to business difficulties. Memories of 32 million members can also be relived. The newly launched ‘Cyworld Z’ plans to restore existing member data while introducing a mobile-centric mini home page later this year. However, it remains to be seen whether an adequate service will be available.

Cyworld Z announced on the 2nd, saying: “It plans to acquire the Cyworld service and normalize the existing service.” “CEO Je-wan Jeon solved the problem of overdue wages on the 29th of last month by selling the Cyworld service,” he explained.

Founded in 1999 CyworldIt is a ‘Native Social Networking Service (SNS)’ that started the mini home page service in 2001 and gained popularity in the early and mid-2000s. Although it has secured 32 million members, more than half of the people, has gone down a path of decline after failing to respond to the rapidly changing environment from PC to mobile.

Following a service outage in October 2019, a dispute arose when the business registration rating was canceled due to tax backlogs in May last year. Along with this, Cyworld CEO Je-wan Jeon was charged with back wages and severance pay for 27 employees. In the first trial held last year, he was sentenced to one year and six months in prison. The connection itself was cut off because the server maintenance fee was not paid properly. As it was considered virtually impossible to recover, there was great concern that it would be impossible to recover data, such as photos, left by existing users on Cyworld.

But Cyworld ZOn the 29th of last month, the service can be resumed by signing a contract to transfer the Cyworld service with Je-wan Jeon. According to the company, the transfer amount equals 1 billion won, which is the amount of overdue wage claims between the former CEO and Cyworld employees.

‘SNS Ancestors, why do you live again?

Cyworld Z, a newly created corporation, is a comprehensive entertainment company. ENM skyIt is a corporation constituted through the formation of a consortium of five companies included. These are known to include medical equipment companies and investment companies. It is a position that the company name will not be disclosed until Cyworld normalizes. Cyworld Sky ENM’s largest shareholder is a drama production company. Green snake They are the media. Cyworld Z secured 8 billion won in investment. Currently, there are about 40 people, focusing on server maintenance and marketing strategies. Development is carried out by a specialized outsourcing company. Jong-won Oh, CEO of Cyworld Z, is known as a former managing director of investments in a medical equipment company.

Cyworld Z selected user size as the decisive reason for acquiring Cyworld. In a phone call with 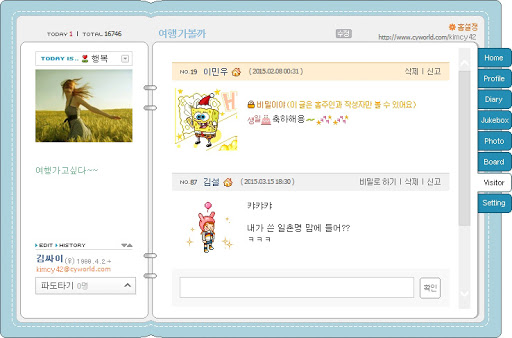 The difference is ‘share’, Acorn and BGM remain the same

There are two main plans for the future. It is about restoring the mini homepage optimized for ‘virtual reality’ for mobile devices and reviving the ‘Acorn’, which was a profit model. The new mobile version 3.0 is expected to focus on scalability. However, it remains to be seen if such a change will satisfy the demand of 10 million users who have already visited Cyworld. It is not known whether the companies that formed the consortium have the capacity to ensure competitiveness in the current NHS environment.

CEO Oh said: “GloballyRoblox(Platform role-playing games) are popular. The origin of this virtual reality is the mini home page of Cyworld. “” In the past, if it was a structure where others visited my mini home page, which was decorated with my own space, version 3.0 will share the mini page of start in virtual reality space. It will be an interesting model ”.

“If you search for Cyworld BGM on YouTube, it has had 4 million and 5 million views. In this way, to re-implement the mini home page in the memories, it is not simply a matter of moving the old version from PC to mobile, but to turn it into a more scalable mini home page ”, he explained.

The company plans to keep the existing earnings model, such as purchasing an Acorn-based mini homepage background music (BGM). He announced that he also plans to include the virtual currency. CEO Oh said: “Acorn will continue as is. Even if you only get the BGM fee, it’s a tremendous profit model, ”he said.

Meanwhile, Cyworld Z announced that it will resume its existing service normally before launching the mobile version 3.0. CEO Oh told