The number of game investments and acquisitions dropped in the second quarter of 2020, compared to the first quarter, but the value of the deals was higher, according to data collected by game investment specialist Sergei Evdokimov.

These figures indicate the game market is continuing to experience vibrant growth through investor deals, as the world realizes how resilient video games have been during the pandemic and deal-makers adapt to working remotely. Deal activity was roughly steady, with over 100 deals tracked (102 vs. 110 in Q1). But at $7.8 billion, the total value was 3.1 times higher in Q2 than Q1. Even more impressive, the deals happened in a quarter marked by huge layoffs and shakiness across venture capital investments.

The most active segment in Q2 was mobile, with 28 deals and a total value of $2.6 billion, according to the report Evdokimov prepared with assistance from Anton Gorodetsky. (They both work at My.Games, but the company doesn’t produce the report.) All the data for this InvestGame report is open source, but all gaming deals are not fully disclosed to the public. Evdokimov said he is working on a beta version of a game deals intelligence platform.

The major reason for the lower number of deals in Q2 is that general investment activity declined in April and May, with fewer early- and later-stage deals announced, Evdokimov said. Part of that may have been due to the difficulty of travel and the inability to meet entrepreneurs in person.

Since it takes two to three months (on average) to get a deal completed, the COVID-19 crisis in February and March probably dampened the number of deals in April and May, Evdokimov said.

However, the whopping $7.8 billion dollar value of those deals was much higher than the $2.6 billion in Q1. The highest-value deals were the secondary public listing of Chinese gaming giant NetEase ($2.7 billion) and the sale of Turkish mobile company Peak Games ($1.85 billion) to Zynga, both announced in June. Compare this to the biggest deal of Q1: the sale of Saber Interactive to Embracer Group for $525 million in February.

The most active segment in Q2 was mobile, with 28 deals (compared to 31 in Q1) at a value of $2.6 billion (compared to $1 billion in Q1). The next most active segment was multiplatform deals, largely due to the NetEase and Jagex deals ($2.7 billion and $530 million, respectively). Activity in the PC/console segment substantially declined, however, with only $252 million across 12 deals, compared to $1.1 billion across 21 deals in Q1.

Tracked investment deals showed more diversity, with the VC and corporate investments practically unchanged at $721 million in Q2 versus $704 million in Q1, and with slightly fewer deals.

Evdokimov attributed the boost to deferred market demand, due to large volatility of stock markets in February and March and fewer public offerings in Q1; a surge in the product and audience metrics; the general hype around gaming during lockdown; and gaming companies’ improved financials. 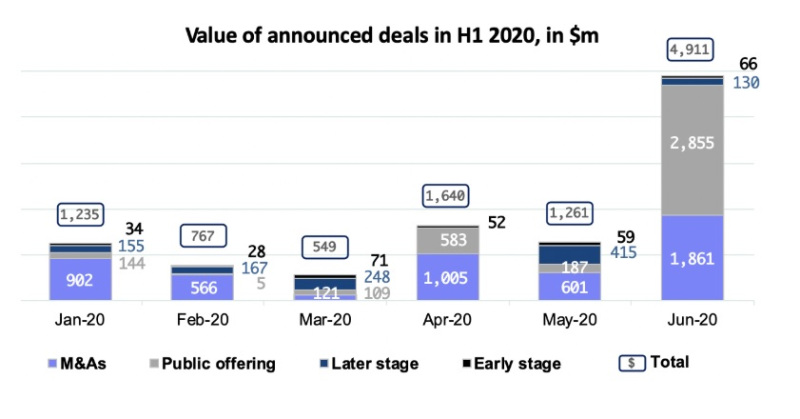 Above: The value of deals announced in gaming in the first half of 2020.

In the “not-yet-happened” section, San Francisco-based video game engine creator Unity Technologies announced it is working with financial advisers to prepare for an IPO on the U.S. stock exchanges this year. According to Bloomberg, the company has hired Goldman Sachs Group to lead the public offering. However, Unity’s plans haven’t been finalized, and the timing could still change. In May 2019, Unity raised a $150 million funding round, putting the company’s pre-money valuation to $6 billion. Unity reported $500 million net revenue in 2019.

AT&T is considering a sale of Warner Bros. Interactive Entertainment (WBIE) for about $2 billion. According to some insiders, potential buyers include Activision Blizzard, Electronic Arts, Take-Two Interactive Software, and Microsoft.

Sony invested $250 million in Fortnite-maker Epic Games for a 1.4% stake. That means Epic Games has raised $1.83 billion to date (having raised $1.58 billion in three previous funding rounds). The deal valued Epic Games at a whopping $17.86 billion.

China-owned mobile game developer and publisher Playtika (known for Slotomania, Bingo Blitz, and Best Fiends) has hired Morgan Stanley and other investment banks to prepare for a U.S. IPO. The company is aiming to go public either later this year or early in 2021 and to raise over $1 billion with an expected valuation of around $10 billion.

Poland-based game developer Bloober Team (Observer, Layers of Fear, Blair Witch) is in a second round of M&A talks with six unknown potential buyers (down from around 12 initial participants). The company’s current market value is around $95 million, with annual revenue of $6 million, Evdokimov said.

Above: Number of announced game deals in the first half of 2020.

On Wednesday, VGames said it had raised $30 million to invest in games in Israel and Eastern Europe. Managing director Eitan Reisel said in an interview with GamesBeat he believes there are about 30 game investment funds operating today.

Several gaming-related funds have raised money during Q2: U.S.-based venture capital fund Grishin Robotics (founded by Dmitry Grishin, a cofounder of Mail.Ru Group) announced a new $100 million fund. The fund has expanded its investment focus from robotics hardware and IT into new industries, such as online gaming and interactive entertainment.

San Francisco-based Transcend Fund has raised $50 million to invest in early-stage game companies. Headed by Shanti Bergel, a veteran game investor and acquirer, the fund has already made some investments, including contributing to the $12 million raised by mobile sports game maker Nifty Games (NFL Clash).

Back in April, San Francisco-based N3twork (known for the Legendary: Game of Heroes mobile game, with more than $250 million in revenues) launched a $50 million fund to help third-party games grow their business through user acquisition, engagement, and retention techniques. The fund is accompanied by a $1 million Pilot Fund, which gives indie game developers $10,000 to promote their games over a month. Graduates of that program become eligible for grants from the $50 million fund, this time for massive scaling.

Sign up for Funding Weekly to start your week with VB’s top funding stories.