Monitors from LG’s UltraGear line are a constant guarantee of unconditional performance in the gaming sector. All the screens in this category that we tested left a lasting impression. If the product designation has the number 950 at the end, you can be sure that the superior model is in front of you. With the LG 32GQ950-B (B stands for black), LG’s spearhead of the year 2022 comes to us for a comprehensive test.

With 3840 x 2160 pixels that solves it IPS panel with a screen diagonal of 31.5 inches and is said to achieve an ultra-fast response time of 1 ms (GtG). Due to nano-IPS technology, the DCI-P3 color space should be covered by 98% and “ATW” (“Advanced True Wide Polarizer”) should achieve even better viewing angle stability.

Smooth gameplay is made possible by a native 144Hz refresh rate, which can be increased to 160Hz in overclock mode. AMD’s FreeSync in the Premium Pro version is of course also on board to eliminate tearing and stuttering, which shouldn’t bother owners of an NVIDIA GPU, as the LG 32GQ950-B is also certified for compatibility with G-Sync. The test subject is also not lacking in brightness, as it bears the DisplayHDR 1000 logo and thus guarantees a true HDR experience. Various gaming tools round out the specs.

On the sheet, the LG 32GQ950-B is already the top dog. We’re curious if he can do this role justice.

You can find detailed information about the features and specifications in the data sheet of the LG 32GQ950-B.

With the LG 32GQ950-B, the manufacturer dispenses with a spectacular packaging design and commits to sustainability. Only the model name and some specifications were printed on the recycled box with no frills, which is definitely welcome in terms of environmental protection. The box, which weighs around 16kg, is 1m wide but only 16cm deep. The ease of transport in the form of two straps is quite unusual, but useful. They are located on the wide side of the box, so there is no need to have a 2m clearance to bring the device to the job site.

As a rule, the entire internal mechanism must be passed through a narrow cardboard opening. In this case, a more user-friendly method was chosen as the box opens at the wide top. In this way, the content can be extracted layer by layer without having to strain. Just below the cardboard lid is the base and a box where the accessories are stored.

Includes power cable, power adapter, DisplayPort, HDMI, and USB 3.0 cables (A to B), a mouse cable clamp, and a cable management clamp. Strangely, there are no papers or a CD included in the box, which is probably due to the fact that it is a test device.

Although the manual and LG Calibration Studio software, including the software guide, can be downloaded from the product website, they were only available in English at the time the test was written. There is also no quick start guide or other usual documents. However, we are sure that LG will provide this before the start of sales.

The support arm and screen sit under the top layer of Styrofoam, which also serves to stabilize the components below.

First, the base and support arm must be assembled and fixed with a screw.

The support arm mounting plate then hooks onto the VESA mount and locks with the snap-in device.

There is also the option of mounting the screen on alternative mounts. This requires a support with the VESA 100 x 100 standard.

The design of the LG 32GQ950-B has undergone a makeover compared to its predecessors. Until now, the focus has been on black plastic with red accents, but now gray dominates, shining in a violet hue on the back.

The panel is bordered by a narrow 2mm wide band at the top and sides. The frame is 20mm wide at the bottom and features the UltraGear logo in the center.

A small brace can be placed under the frame on the right or left side. It serves as a support for the mouse cable.

The depth of the LG 32GQ950-B is 32mm at the top and outside. A shiny stripe adorns the exterior, which has ventilation slots at the back, top and sides. The rear wall is very well designed in terms of design. It has a reflective surface into which many small hexagons have been incorporated in various orientations, creating a pattern worth looking at.

The reflective look also belies the feel, which comes with a rough surface and appears to be remarkably insensitive to fingerprints. The UltraGear logo is incorporated as a reflective embossing on the upper rear wall and glows purple. Directly below is another case that is also in the shape of a hexagon. It measures about 27mm back and, in addition to the air supply on the outer frame, it has additional ventilation slots at the top.

There are two LED strips on each side of the case, which are responsible for the lighting effect of the LG 32GQ950-B.

The monitor arm mounting plate is hung in the center of the display’s VESA mount. Behind it is the tilt pivot, which can be adjusted in a range of -5 degrees forward and 15 degrees back.

A pivot function is also possible and allows a rotation from landscape to portrait mode for easier reading of long Excel lists.

Unfortunately, this device also does not offer lateral rotation, which we already know from the predecessors and criticized there.

The mounting plate slides on a slider system inside the monitor arm and is height-adjustable over a distance of 110mm. In the lowest position, the bottom frame is 75mm from the tabletop. Here you need a lot of force to move the screen over the initial resistance. 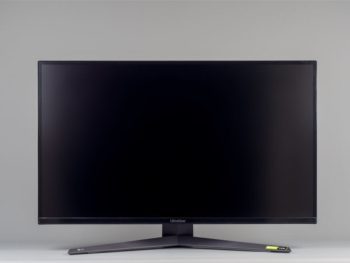 The support arm seems stable and has a cable management clip at the rear. Of course, the shape of a hexagon is used again here. At the bottom, the support arm slides rigidly into the base. It consists of two cantilevers that form an angle of about 120 degrees with each other. To prevent slipping on the floor, three small rubber feet are placed under the base. The construction has good stability and can also withstand somewhat stronger impacts without tipping over directly.

While the front comes with almost the same minimalism as the predecessors, a lot has happened to the back. Of course, opinions differ when it comes to the design, and not everyone will like the shade of purple used as the accent color on the back. However, the rear wall is at a level in terms of material and design that is quite unusual and very attractive looking. Ergonomically, the swivel function would certainly have been nice for the LG 32GQ950-B, and the lift mode could be a bit smoother too. Ultimately though, the screen is very well done and will be particularly popular with fans of the player style.