We’ve been waiting on the LG Velvet for what seems like months now. In fact, we still don’t have pricing and availability for the global version. Everything we know about the device so far comes from the Korean variant, which has been out for a few months. But after patiently waiting, we finally got a Korean variant in our hands.

We haven’t had the LG Velvet for that long — about 24 hours — so we can’t give you a full review of the phone just yet. Right off the bat, there are hot takes flying everywhere, so we can at least give you some impressions. 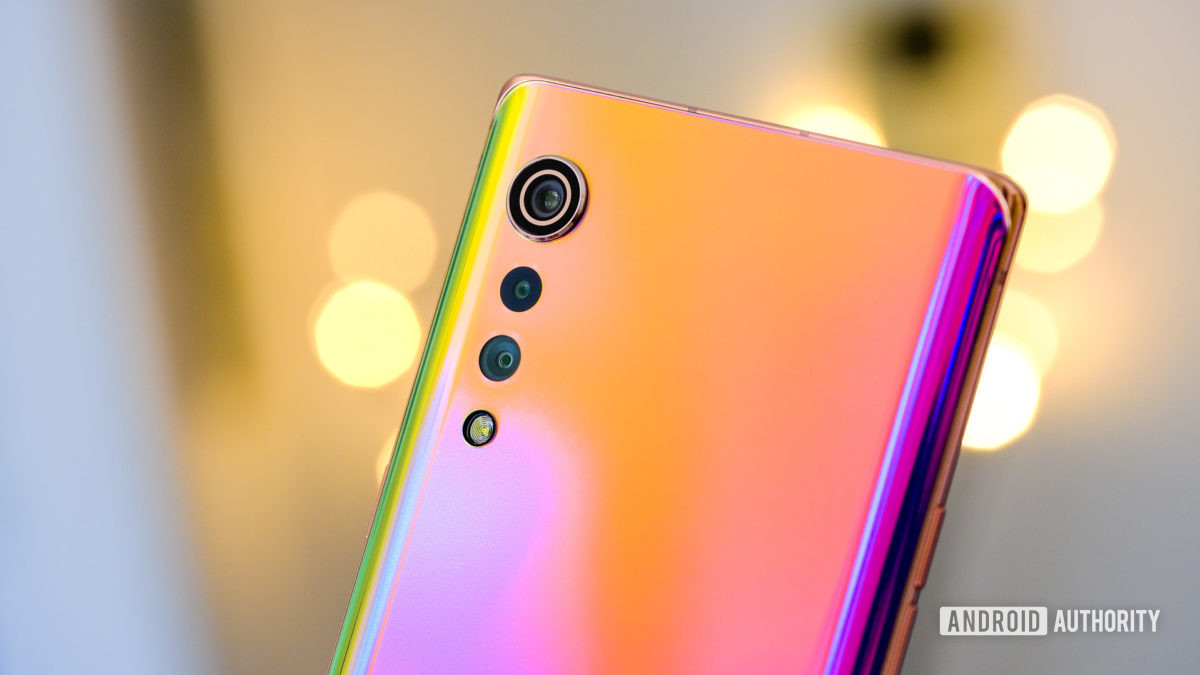 The very first thing you’ll notice about the Velvet is that it’s a huge departure from anything LG has released in the last five years. This is a stylish phone first and foremost, from the bright and vivid color options all the way down to the camera design. LG said it wanted the back of the phone to look like raindrops, and the entire design was inspired by nature. Hear that Samsung? LG is coming for your turf.

The Velvet is also one of LG’s thinnest phones, coming in with a Z-height of just 7.9mm. The thin design combined with the curve on the front and back of the phone makes this thing feel almost too thin to hold, but that seems like the point. LG wants this phone to be a style icon, and it delivered with this design.

This is a bold new design from LG.

The screen is a pretty huge 6.8-inch pOLED display, and it feels extra tall with an aspect ratio of 20.5:9. This is the same aspect ratio as the LG V60, but the thinness of the phone makes it feel extra tall. Is it too tall? That’s hard to tell just yet, but we’ll address that in our full review.

The front-facing camera comes in the form of a teardrop notch. I can kind of see why LG went with this from a style perspective since it’s trying to play into the nature theme. Honestly, a punch hole would have looked much more modern in my opinion. Luckily, LG lets you fill in the notch if you hate it as much as I do.

There are some extra ports on the body of this phone as well. On the bottom, you’ll find a standard USB-C port and some speakers, but you’ve also got a headphone jack along for the ride. And while the left side of the phone sports the volume rockers you’d expect, you’ve also got a quick action key that defaults to Google Assistant. That’s really nice to have.

Overall I am really digging this new design. It feels like a shift from the same old thing we’ve come to expect from LG. 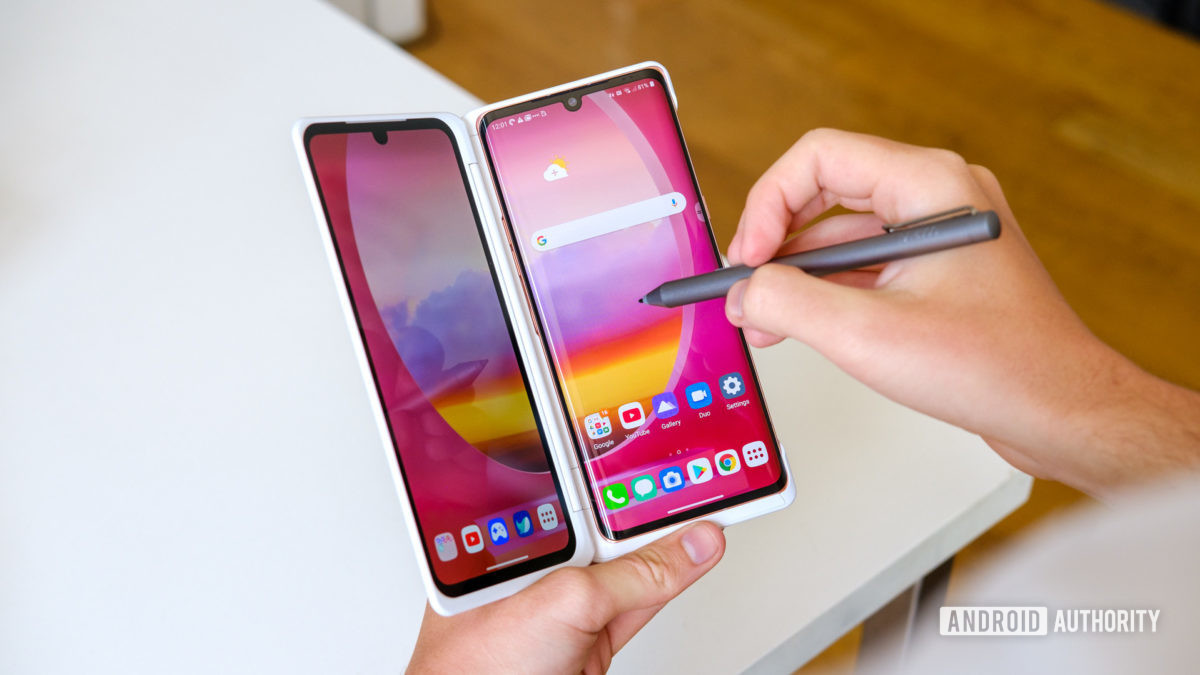 LG is really leaning into the Dual Screen thing. I personally didn’t find it very useful when I reviewed the LG V60, but some people really do like it. LG managed to make this dual-screen case thinner than the one that goes with the V60, but it still adds a lot of thickness to the phone. Unfortunately, using the case removes wireless charging capabilities and forces you to use a proprietary pogo pin charging format with an included USB-C-to-pogo pin nob. I hate this. It is small. It is incredibly easy to lose.

Like on the V60, the case will show you ambient information on the front like the time, date, and basic notifications. However, the resolution of this display is pretty low. I’d like to see it improved in the next generation.

LG also included a Bamboo Ink stylus with the LG Velvet, which can be used to draw on either screen. There are also two function buttons on the pen that you can map actions too. This would be nice, except for the fact that there is nowhere to store the pen. Does LG expect you to carry around a big stylus all the time? I guess. How weird. 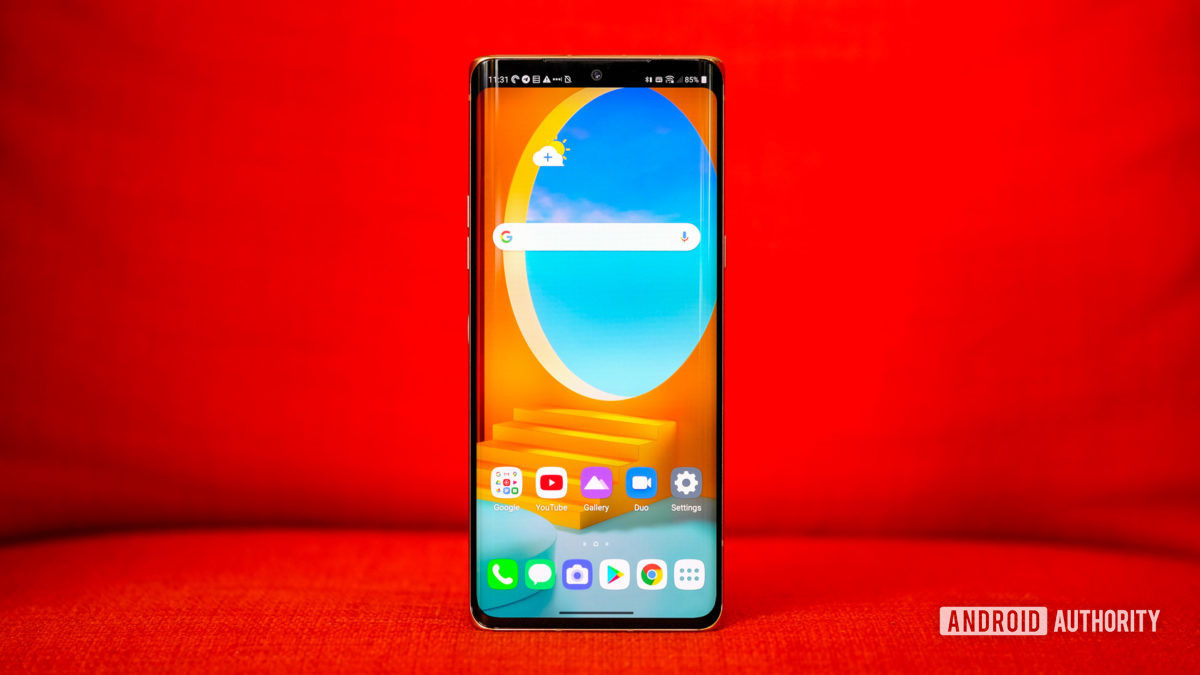 Our full review is coming next week, but in the meantime, check out our unboxing video at the top of this article! We go through setting up the phone, as well as some other accessories that LG will be selling for it. Let us know what you think.