Some mini PCs impress not only with their size, but also with their details. In the case of a model now presented by a Chinese manufacturer AMD Ryzen 5 APU this is a kind of “steam wheel” in the housing, with which you can get more performance if necessary.


The Chatreey AMR5 Mini PC is basically a kind of AMD based NUC which is a very small desktop PC with a CPU that is actually designed to be used in laptops. Under the hood is the aforementioned AMD platform, with a total of six compute cores and 12 threads, as well as one integrated. AMD Radeon Vega 7 GPU it should guarantee more than enough performance in office or multimedia use.
Chatreey AMR5

Above all, the little PC has one cool feature: It’s designed to work in a portrait orientation, with the power button on the top case that also contains a spinner. This allows the user to choose between three modes of operation. There’s still enough power for audio and video playback in silent mode, but otherwise it’s reduced to a minimum to allow completely silent operation.

In the so-called balance mode, a balanced operation with good performance but the lowest possible noise emissions should be possible, while the performance mode should of course offer the highest possible performance in order to be able to work smoothly in games. or other demanding situations. Chores. The user also recognizes the selected mode by the changing LED lighting on the power button. 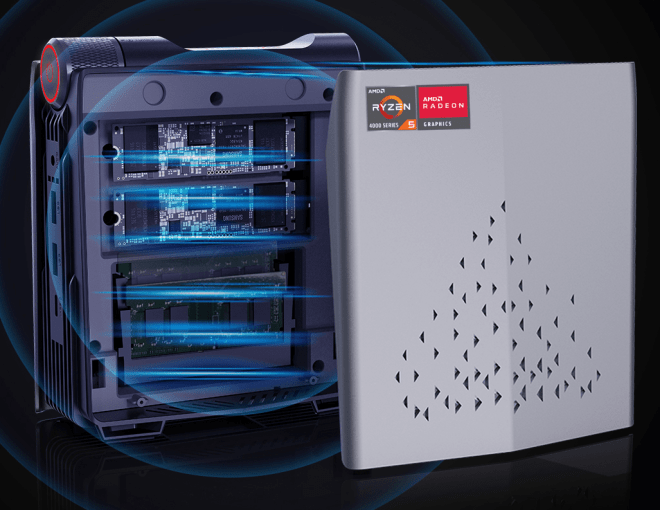 Apart from its “speed wheel”, the Chatreey AMR5 offers good barebone equipment, so it can be equipped with up to 64 gigs of DDR4 RAM in SODIMM format if desired. It also has two M.2 2280 slots that house PCIe NVMe SSD place. Access to main memory and SSD slots is via a magnetic side cover, so no tools are required.

Other features include Bluetooth 5.1 and WiFi 6, a copper fan cooling system, HDMI and DisplayPort connections, a Type-C and four USB Type-A ports, a Gigabit Ethernet port, and of course, an audio jack. The device is about aliexpress it’s offered as a barebones version at prices starting at €476, but can also be purchased in preconfigured versions if desired.