In Profane, dungeons would not be fixed locations in the game world, but accessible through portals acquired and opened by players, wherever they want to benefit other players or not. Every dungeon would be an opportunity.

the How to play of MMORPG Profane should be based primarily on open game mechanics that give pride of place to player-to-player matches (PvP). However, the game will also include dungeons, the developer of which specifies the operation, always within the framework of the presentation of the project to collect the opinions of the players.

We first remember that the notion of profane dungeons is very broad – These include the dungeons commonly found in MMOs, but also a good number of “areas of interest” (mines), or even entire territories that are home to neutral or even hostile creatures. The game could have many different dungeons, including the level difficulty would vary greatly.

More specifically, profane dungeons are hybrid spaces: they are not “open” dungeons accessible to everyone without conditions or instances. The developer is considering a mechanism through which players could obtain magical items (quite rare, for example, after facing a Pattern) allowingopen a portal to one of these dungeons – The portal would be temporarily opened, allowing the player to enter it, but also all surrounding players (members of their party and strangers who pass through it). 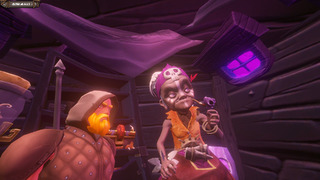 The objective of this mechanism is to allow the creation of Unique and ephemeral “points of interest” but managed by the players. Specifically, a player who would like to explore “his” dungeon could only open the passage in a remote and sparsely populated area; then you will undoubtedly have the exclusivity of the dungeon and its contents, but you will have to face it only with the risk of dying there if it is not the size. That same player could instead make the decision to open the portal in the middle of a capital city and a large number of players could join him in the dungeon and the players could try to do it collectively, or take on him. According to the developer, the content of the game could cause players to rethink the way they play (enemy players could band together to fight together against a hostile faction of NPC dungeon, for example).

See also  The phone that charges to 100% in less than half an hour. OnePlus also reveals the surprise option

The dungeons would be anyway a unique opportunity or occasion based on the player’s choices, either by successfully opening a portal or by being in the right place at the right time. Each dungeon exploration would potentially be a unique experience, and these areas will no longer be explored mechanically or by necessity of equipping.

And at the same time, the developer is also considering ” premium towers »Access to which could be acquired in stores (the mechanism is still being studied and could depend on the sale of other types of content, such as Fur more traditional). These would not be the same dungeons as those accessible in the game, but ” cosmetic dungeons »: Areas with a particular aesthetic that players would like to visit, such as visiting a museum or revealing a part of the science from the game world, and allows you to obtain cosmetic items. And again, players who open these dungeons could benefit others.