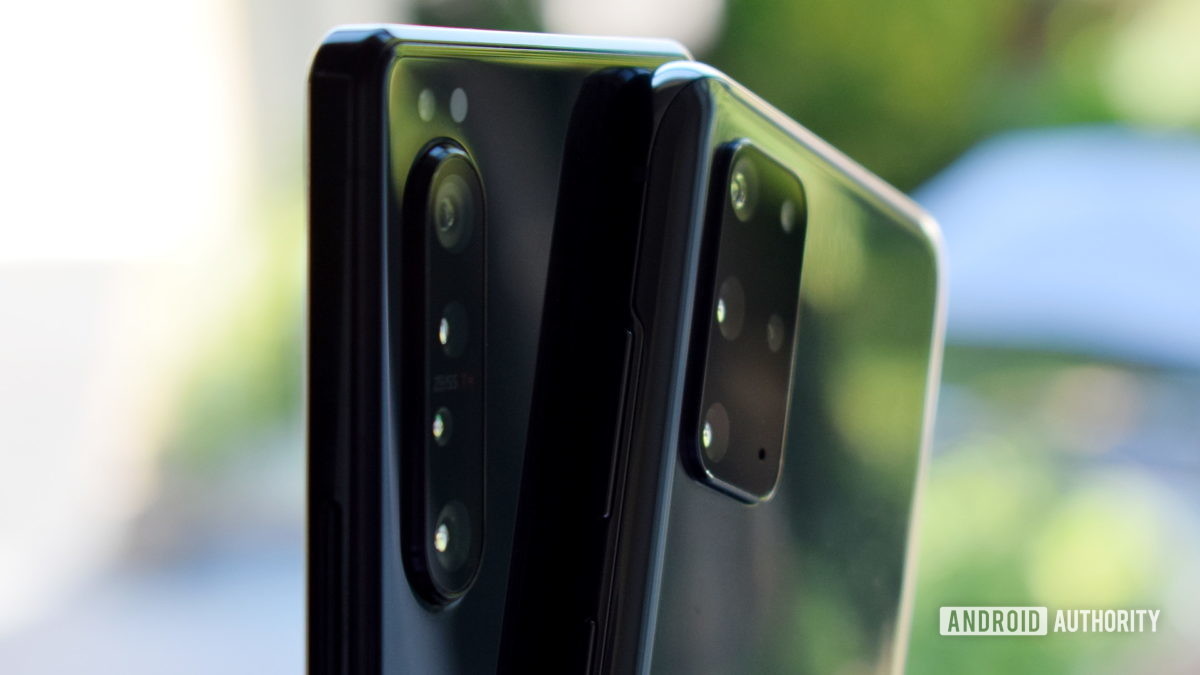 Despite building the image sensors used by a number of high profile smartphone cameras, Sony handsets haven’t ever quite perfected their mobile photography game. The Sony Xperia 1 II comes sporting Alpha-branded features and Zeiss lenses in a bid to convince us that this time is different.

Today we’re taking the phone’s camera out for a spin with the Samsung Galaxy S20 Plus. Samsung’s 2020 flagship is a capable shooter and a phone that’s bound to be on nearly every high-end customer’s radar. But let’s see if the Sony Xperia 1 II is a competitive purchase for those of you big on camera quality.

Before diving into the images, let’s review what each smartphone offers in the camera department.

The two handsets provide a familiar formula, with main, wide-angle, and telephoto zoom sensors for a highly flexible package. The phones also both include a low-resolution time-of-flight depth sensor to improve software bokeh quality.

Despite the package similarities, a closer look at the specs reveals some interesting differences. Sony’s 12MP main sensor is slightly larger and offers a slightly wider aperture than Samsung’s 12MP setup, hinting at better light capture. While Sony sticks with 12MP sensors across the board, Samsung has a 64MP zoom option for extra detail, albeit relying on a hybrid software approach to its 3x zoom. We’ll have to see if that’s a better approach versus Sony’s 1/3.4-inch 3x optical zoom sensor.

If you fancy analyzing the images yourself, click here for the full quality samples. Also, note that I used the standard Xperia 1 II camera app, rather than Photo Pro, too see how both phones handle shots with the least manual input possible.

The most instantly noticeable difference between the Galaxy S20 Plus and Xperia 1 II cameras is their color processing. Samsung opts for punchy colors that are, frankly, over the top in most situations. You can see this noticeably in overly blue skies, plant greens, and deep pinks/reds. The Xperia 1 II is more conservative and realistic with its color pallet, but both can appear a little too warm in some instances. Sony’s handset also doesn’t do nearly as well with HDR compared to Samsung, which offers excellent exposure control.

The Galaxy S20 Plus also offers fractionally better detail capture and lower noise than the Xperia 1 II, although both cameras are quite good in this regard and you really have to crop in to notice. These differences become more pronounced with the wide-angle cameras. Sony’s images have notable grain and slightly less noticeable processing. However, the Xperia 1 II struggles with focus and detail compared to Samsung’s implementation. Neither wide-angle lens is perfect, though, and you’ll find chromatic aberration and lens distortion aplenty.

I also took a couple of quick bokeh shots to test out how well these phones handle edge detection and blue quality. Edge detection is quite good on both phones, although the Xperia 1 II’s is a fraction cleaner. The added depth sensors help both phones with bokeh accuracy. However, Sony opts for a softer bokeh by default, which looks more natural, and has a more realistic progression from in to out of focus.

Picking up a Samsung? Best Samsung phones you can buy

The biggest hardware difference with the Galaxy S20 Plus vs Xperia 1 II is the zoom cameras. Sony opts for a lower resolution but optical 3x zoom, while Samsung uses a high resolution and hybrid zoom tech. The results are… interesting.

At full-frame, both phones appear to offer comparable levels of detail. Instead, it’s the familiar processing difference, such as color and HDR/exposure, that is most obviously noticeable between the two. Overall, Samsung is the most consistent across all three of its cameras, but that isn’t to say Sony’s results look bad in most cases either.

However, cropping in to 100% on these zoom images reveals the shortcomings of Samsung’s hybrid approach. Details definitely don’t hold up as well on the Galaxy S20 Plus and there are clear signs of heavy processing from the hybrid upscaling. It’s not the worst I’ve seen, but it doesn’t look great.

The Xperia 1 II holds up much better thanks to its optical zoom length, with far fewer signs of heavy processing. However, Samsung’s hybrid approach retains a consistent look across zoom levels while there’s an obvious jump up in quality at 3x with the Xperia 1 II. Oddly, Sony’s camera app doesn’t actually use the optical lens if you pinch-zoom up to 3x. You have to click the 3x icon to obtain the best zoom quality. Likewise for accessing the wide-angle lens.

The Samsung Galaxy S20 Plus and Sony Xperia 1 II rely on long exposure night modes for shooting in the dark, resulting in some blur and loss of accuracy. Movement blur affects the Xperia model the most, suggesting a slightly inferior image recomposition algorithm. See the first image. The lack of multi-frame HDR capture doesn’t help here either. But when it comes to detail and noise, both sensors again perform very closely. This is a major upgrade from previous Sony flagships, which lacked a dedicated low light shooting mode.

Sony’s handset nudges ahead with dynamic range and color when shooting in very low light. You can notice this particularly in the second image, where the flowers retain their color much better. However, Samsung does a better job of correcting for overly warm light sources.

Up next: How are smartphone cameras becoming so good in low light? 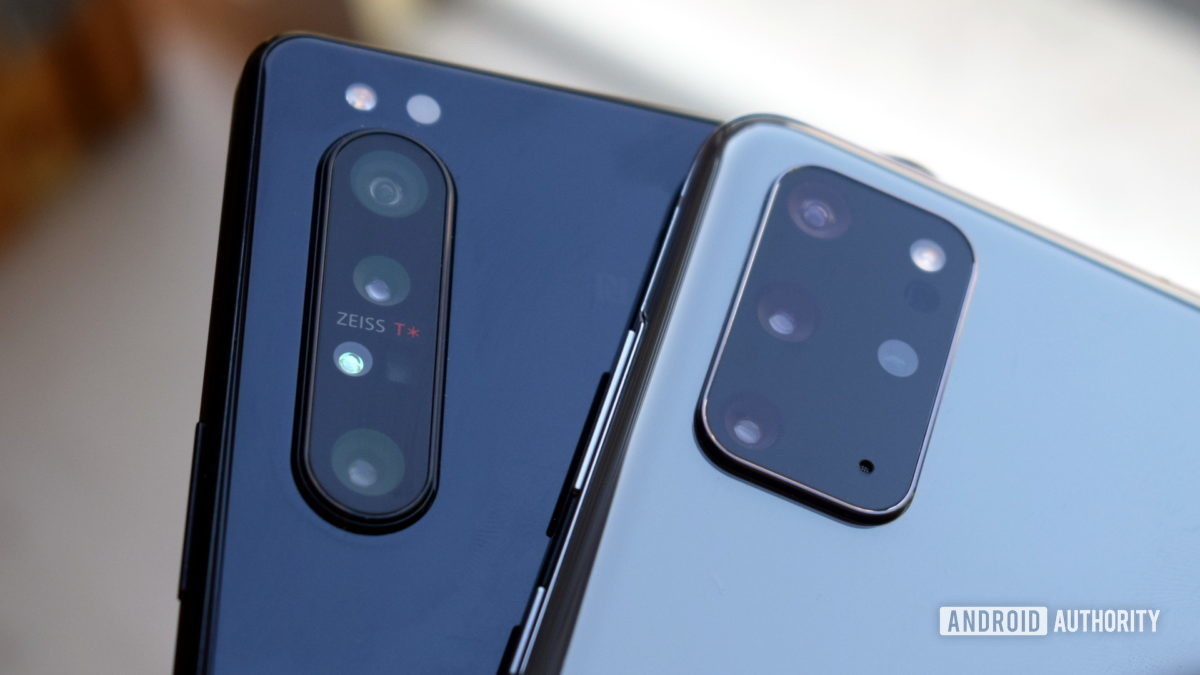 Despite my regular complaint about Samsung’s oversaturation, its latest flagship comes out ahead in our Galaxy S20 Plus vs Xperia 1 II showdown. The S20 Plus offers consistent image quality and processing across all three of its cameras, the software does everything you want, and the phone offers good HDR and Night Mode options.

The Sony Xperia 1 II scores a few points over the S20 Plus, however. The phone’s color saturation and accuracy are notably better and it offers superior dynamic range in low light. The phone’s software bokeh is a tad better too. Sony is also lighter on the post-processing, exposing a few more flaws in exchange for some nice looking grain.

I really want to like the Xperia 1 II’s camera, as it does a lot right. However, the lack of a decent HDR implementation results in far too many shots with blown-out highlights or poorly-exposed shadows. These simply look bad next to any modern smartphone camera. There is a more functional multi-frame HDR mode in the Photo Pro app, but this really should be a standard feature in the default app too. Likewise, the odd situation with activating the zoom lens suggests that Sony still isn’t paying enough attention to the finer details of its camera experience.