It is well known that cats reign on the Internet. Among the pioneers of this feline domination, is Simon’s cat, a great white cat born in 2008 on YouTube. First, the protagonist of a black and white cartoon series “Simon’s Cat”, which has no other name, has accumulated millions of views to the point of wandering into short films, some of them in color. Then came the books and, more recently, a video game: Simon’s Cat: Story Time, in Apple Arcade. The opportunity to talk about the nine lives of this endearing cat with its creator, Simon Tofield.

Simon’s cat, a star with 1.2 billion views on YouTube

The pure British Simon Tofield, animator by profession, created the first sketch of Simon’s cat in 2008. “I started with a video of a cat waking up a man in his bed and it went viral thanks to YouTube. I made another video, then another, etc. And that’s it. It immediately became a full-time job.” recalls the English to the microphone of Europe 1. These brief scenes of the banal life are centered in a feline “cheeky, mischievous and a little too well fed constantly looking for ways to eat croquettes. “” And because of that, he makes his poor master go crazy, “laughs Simon Tofield.

In fact, the teacher is him! Now 50, he is the proud owner of five inspirational cats. “It is 50-50 between reality and humorous exaggeration. I take many behaviors that people who have cats will recognize, for example when they successively support their front legs on a quilt, and I accentuate them,” explains Simon Tofield. Mix of slapstick comedy and ironic English humor, the recipe works from the videos of Simon’s cat Today it accumulates 1.2 billion visits on YouTube.

A cat drawn in all its forms.

The other force of Simon’s cat, is its simple and immediately recognizable graphic style. In 13 years, the cat has not changed one iota. “It’s white because I started with a black and white video. When I added colors, I kept it white because I thought it made it stand out against the background,” says Simon Tofield. With over a hundred videos on the counter, the whimsical cat provides work for its creator. “Today, I make two videos at the same time, knowing that a typical video takes an average of five to six weeks.”

But in recent years, the British have changed the world of Simon’s cat stretching videos up to ten minutes and sometimes adding color. “I added other characters, other cats inspired by my own life. I never get tired of that,” he says. “I drew books about him, but I never thought it could be a good video game,” adds Simon Tofield. When Danish mobile gaming studio Tactile Games suggested the idea to him, he was surprised. The start of an unprecedented adventure for Simon and his cat.

An untold story of Simon’s cat

Tactile Games has designed a game in two parts: on the one hand, a narrative story around Simon’s cat, on the other hand, a puzzle game mechanic similar to that of Candy crush. The result, Simon’s Cat: Story Time, Available for iPhone on Apple Arcade subscription, it doesn’t sound like much, but it’s pleasantly nice throughout.

More precisely, it is the story that attracts the interest of the game. “First I worked doing a lot of drawings for the characters, the houses, the animals. Then I got involved in animation to make sure the drawings came to life. As they should. Finally, I got on to the script,” recalls Simon Tofield. For once, the story is more about Simon than about his cat. In this case, you must, with the help of your neighbors, prevent a property developer from constructing buildings instead of an abandoned park.

A clever mix of puzzles and investigation.

The story is divided into tasks: talk to someone, trim a hedge, feed the cats, build a greenhouse, etc. There are several gardens to explore and renovate with, as a common thread, an unsolved mystery about the origin of the park. Simon, his friends and their cats lead the investigation between two cups of tea, spirit British obliges. “I put a bit of myself in each place, it’s very personal. The good thing was seeing my drawings come to life so quickly. There is something fascinating about seeing my characters, some of whom do not. They have never gone beyond the stage. “. 2D drawing, moving and coming to life, ”says Simon Tofield. 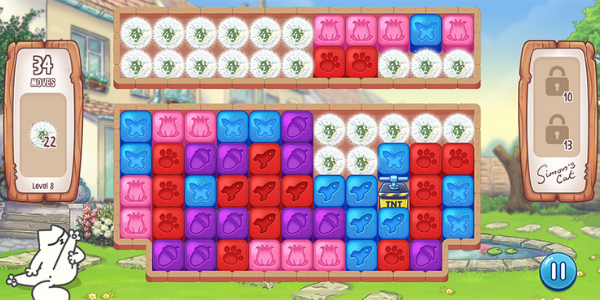 The other side of Simon’s Cat: Story Time, these are the minigames. Each task requires energy, represented by stars: two stars to plant flowers, three stars to build a bank… To have stars you have to solve puzzles in the form of grids of colored squares that you have to associate to make combinations. Solve puzzles, perform tasks, solve puzzles, perform tasks… It’s a bit repetitive but that’s how we move forward in the story. With over 500 grids, the game easily takes ten hours.

After the video game, the movie Simon’s cat ?

Proximity to Candy crushNot very cheerful at first, he finally fits in well with the game’s country aesthetic and its laid-back pace of inquiry in slippers. “I was sure that as long as the story appealed to the players and the game mechanics were easy to understand, it seemed like another game would not be a problem. It’s because you want to know that after that we are going to play. I’m delighted with the result. “Simon Tofield marvels.

This project, much larger than his usual videos, also showed him that the universe of Simon’s cat could lend itself to large formats. And why not the cinema. “Never say never! I never imagined making a game for mobile devices a few years ago. Simon’s cat It has never stopped growing so there are no barriers. So a movie one day, yeah, that would be nice, ”laughs Simon Tofield.

One thing is certain, your virtual cat has not finished reigning on screens, big or small.