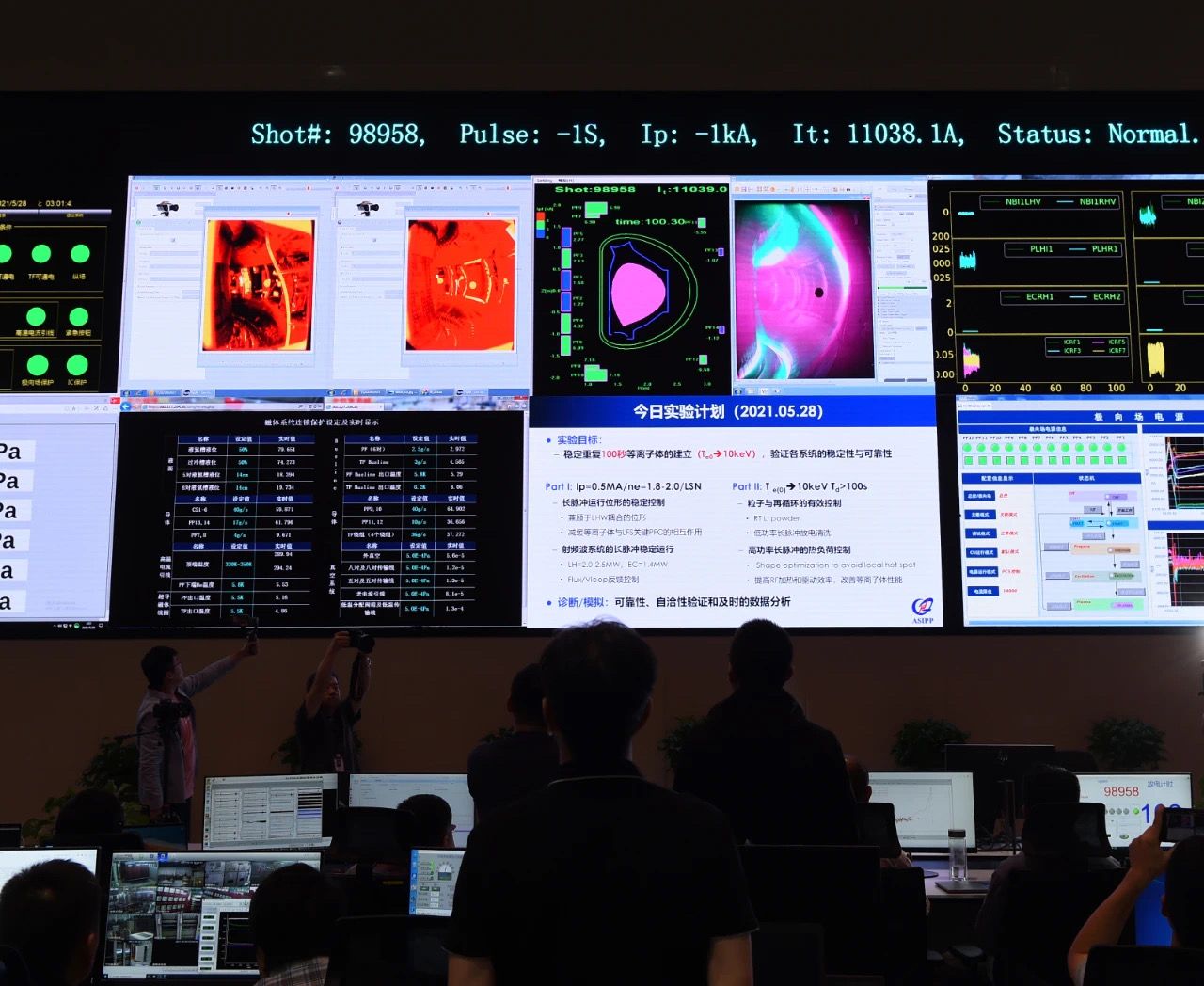 ▲ In the early morning hours of May 28, in the control room of the fully superconducting Tokamak Nuclear Fusion Experimental Facility (EAST), the screen showed the moment when the 120 million degree Celsius plasma was operating for 100 seconds. Image Source: Xinhua News Agency

China’s “artificial sun” experiment broke the world record, meaning that humans have made another breakthrough in their efforts to turn nuclear fusion into inexhaustible and inexhaustible new clean energy. 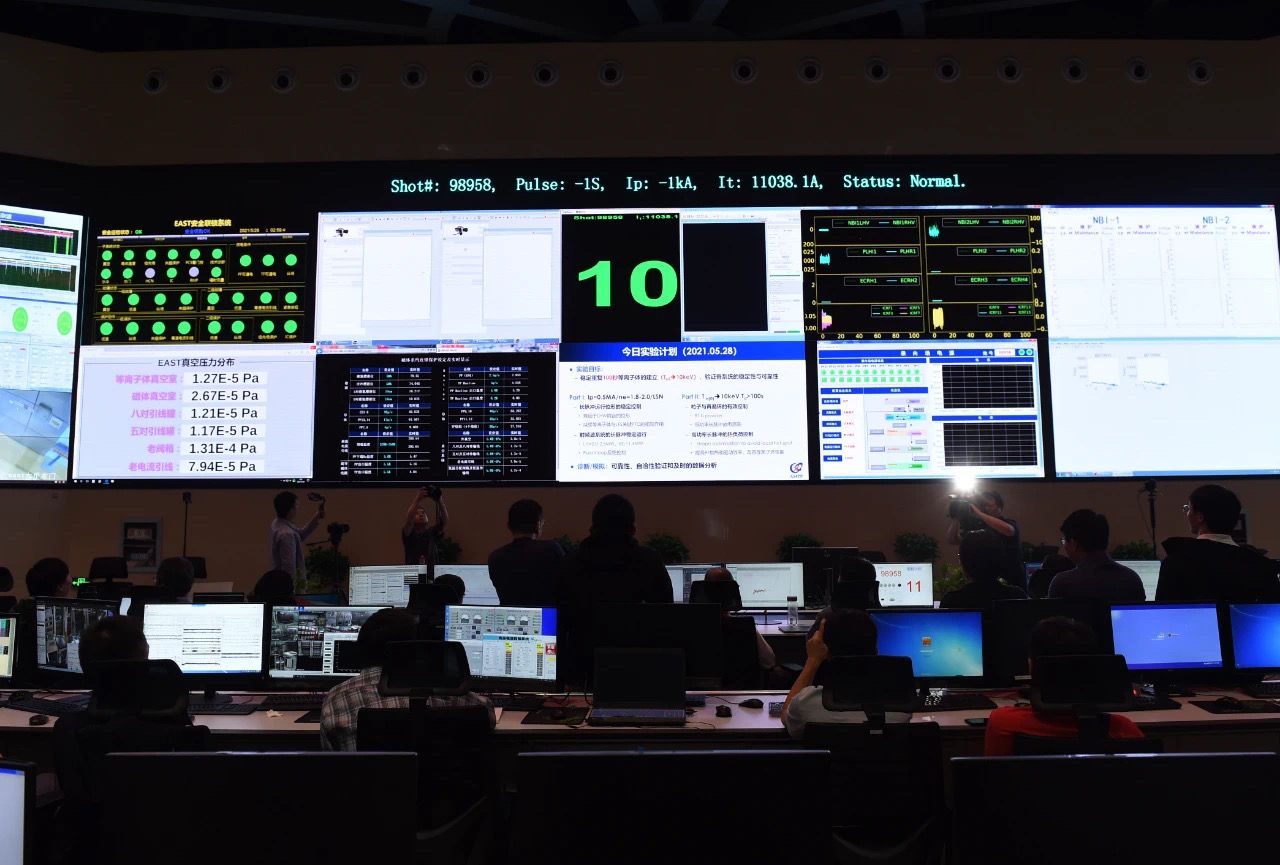 ▲ In the early morning hours of May 28, in the EAST control room, the screen showed that the experiment entered a 10-second countdown Image source: Xinhua News Agency

Energy is the fundamental driving force that drives the operation of everything. The energy used by humans today mainly includes fossil energy (coal, oil, natural gas), wind energy, hydroelectric power, solar energy and nuclear energy (power generation from nuclear power plants). However, these energy sources have many shortcomings, such as coping with resource depletion, environmental pollution, endangering health and life (radiation from nuclear power plant accidents), and being limited by climatic or geographical conditions. , so they cannot fully and completely satisfy human needs.

However, the energy produced by nuclear fusion can not only fully satisfy human needs, it also does not pollute the environment or harm humans or organisms.

According to calculations, the deuterium contained in 1 liter of seawater can produce 300 liters of gasoline combustion energy after the nuclear fusion reaction, and the product is not harmful. Therefore, nuclear fusion energy is considered the last ideal energy.

All aspects of human production and life can use nuclear fusion energy. Although it is not a “perpetual motion machine”, nuclear fusion can provide energy for a long time. Not only can you realize that the American Marvel superhero Iron Man relies on the small reactor in the chest for power, electric cars in daily life,Mobile phoneThere is no need to charge, even spaceships can have infinite energy to travel in space.

Not only that, the products of nuclear fusion are helium and neutrons, which do not emit harmful gases, nor do they endanger life and health. They help to keep the ecology and the environment in good condition, and reduce the greenhouse effect, acid rain and haze. on earth. Furthermore, since the raw materials can be obtained from seawater, the cost of obtaining nuclear fusion power will be extremely low.

The first condition for nuclear fusion is to make the fuel in the fourth state of matter, that is, the plasma state. Plasma is a completely ionized gas that is electrically neutral as a whole. At high temperatures, the electrons in the plasma gain enough energy to break free of the nucleus’ bondage, and the nucleus is fully exposed, making it possible for the nucleons to collide and react.

Of course, the most important indicator of controllable nuclear fusion as an energy source is the energy gain coefficient, which can be called Q, which is the ratio of the energy produced by fusion to the energy consumed to maintain the plasma, it is say, production. /input. Obviously, Q must be greater than 1, that is, the production is greater than the input to provide energy to people.

As early as 1957, the British physicist John D. Lawson proposed a criterion. If you want Q to be greater than 1, the product of the plasma density, the temperature, and the energy confinement time (that is, the triple fusion product) should be greater than one. Value.

That is, to realize the energy production and supply capacity of the “artificial sun”, several conditions must be met: it must have a high temperature of more than 100 million degrees Celsius, the plasma must be confined in a limited space. for a long time, and there should be enough high density. Looking further, to realize nuclear fusion power generation, how to achieve ignition of hundreds of millions of degrees Celsius and plasma stability and long-term confinement control are two major difficulties that are particularly difficult.

Now, Chinese research is also developing towards this fixed value. China’s nuclear fusion experiment at the EAST facility is by electromagnetically induced magnetic flux change, which will generate a plasma current of ≥ 1 million amps; the duration will reach 1000 seconds, and the temperature will exceed 100 million centigrade. under high power heating. 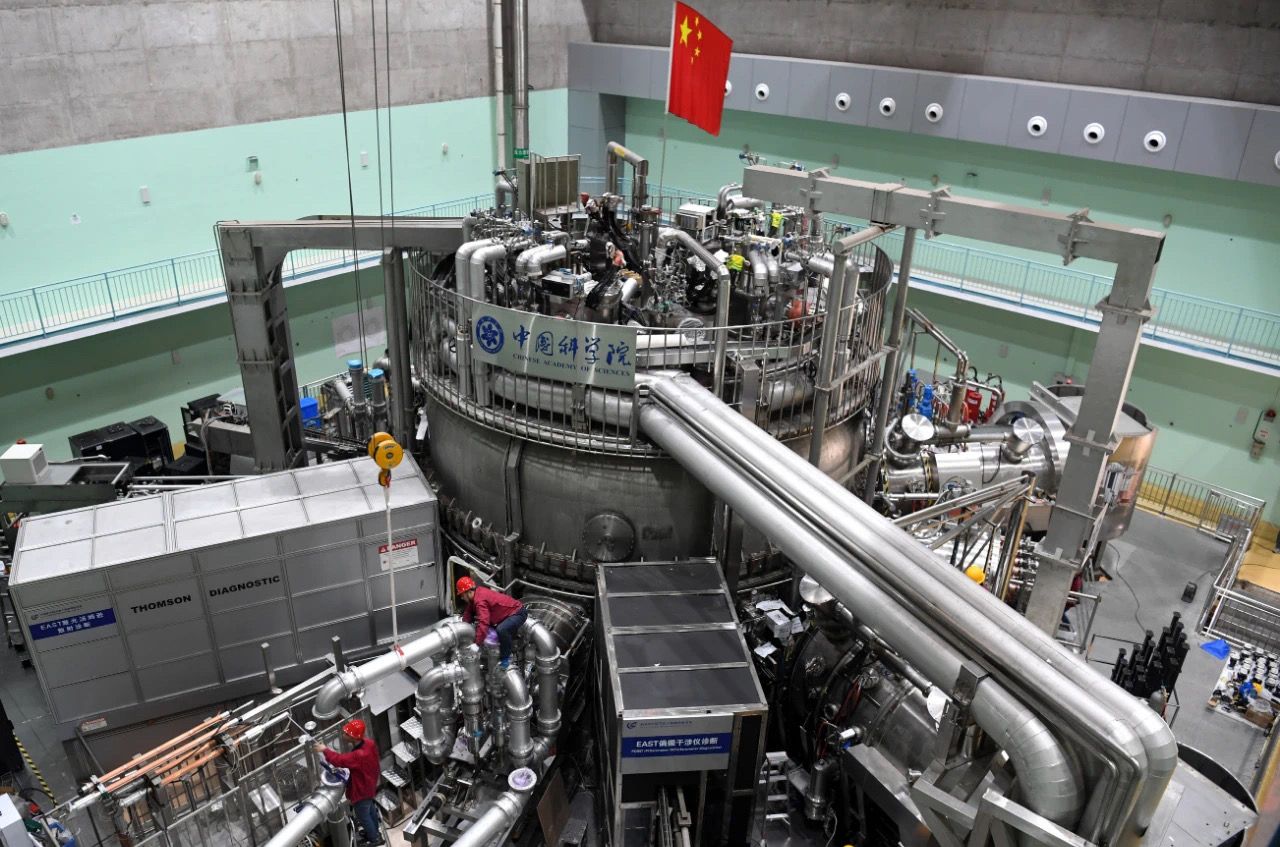 ▲ On April 13, EAST was in the process of updating Image Source: Xinhua News Agency

Many countries are pushing the “artificial sun” plan

Recognizing that nuclear fusion is the ultimate goal of solving humanity’s future energy, there is cooperation and competition in nuclear fusion research at the international level.

The sample of cooperation is that on July 28, 2020, the launch ceremony of the major installation project of the International Thermonuclear Experimental Reactor (ITER) program was held at the organization’s headquarters in France. The ITER plan is jointly implemented by China, the European Union, India, Japan, South Korea, Russia and the United States.

As an experimental fusion power reactor, ITER will confine a high-temperature plasma made up of hundreds of millions of degrees and tritium deuterium in a magnetic cage with a volume of 837 cubic meters to generate 500,000 kilowatts of fusion power for 500 seconds. The thermal power of 500,000 kilowatts is already equivalent to the level of a small thermal power plant.

This type of magnetic cage is the Fully Superconducting Tokamak Nuclear Fusion Experimental Device (EAST), and relevant research is underway in the United States, South Korea, and other countries.

On December 28, 2020, the Korean Advanced Research on Superconducting Tokamak (KSTAR, known as South Korea’s “artificial sun”) set a new world record at that time, and its ion body stood at more than 100 million degrees Celsius for 20 seconds. Obviously, the temperature is lower than the 120 million degree Celsius 101 second plasma operation in China, and the time difference is 5 times.

In early 2018, the Massachusetts Institute of Technology Center for Nuclear Fusion and Plasma Science in the United States began designing and building a SPARC fusion reactor that is more advanced than ITER, meaning the fastest, most small, private, affordable, compact and powerful The thermonuclear fusion device is tens of times smaller than the ITER reactor, and the cost is greatly reduced. But it remains to be seen whether this goal can be achieved.

Now, Chinese researchers have achieved 120 million degrees plasma operation in 101 seconds, which has increased the world record of 100 million degrees in 20 seconds in the EAST device physical experiment in 2020 by 5 times, which indicates that China has another full research capability in the EAST device. A breakthrough has also taken another important step towards obtaining nuclear fusion power.

In the future, if the production capacity and energy supply of the “artificial sun” is achieved, it will be another technological revolution that can promote social progress more than the industrial revolution for the entire human world.