Facebook name change to ‘meta’ and a fresh start?

Facebook CEO Mark Zuckerberg made a surprise announcement on the 28th local time.

The name of Facebook, which has been around for 17 years, will be changed to ‘∞ (meta)’, the mathematical symbol for infinity.

“We’ve been thinking a lot about our identity,” Zuckerberg said.

Metaverse refers to a three-dimensional virtual world fused with the real world, and is a concept that has evolved from virtual reality (VR) and augmented reality (AR).

Zuckerberg demonstrated his digital avatar by speaking to friends and family in multiple different digital spaces.

Zuckerberg has long professed to build a metaverse that allows people to freely cross borders by mixing online and AR / VR.

Metaverse is the next big social platform and some information technology (IT) companies are making it through for the next decade or so.

In a recent earnings announcement, Facebook also expressed its ambition to become a major player in this field by announcing that it would separate and announce the results of ‘Facebook Reality Labs’, which oversees the AR / VR business.

However, the analysis of the media is that the name change is also related to the recent crisis that Facebook is going through. 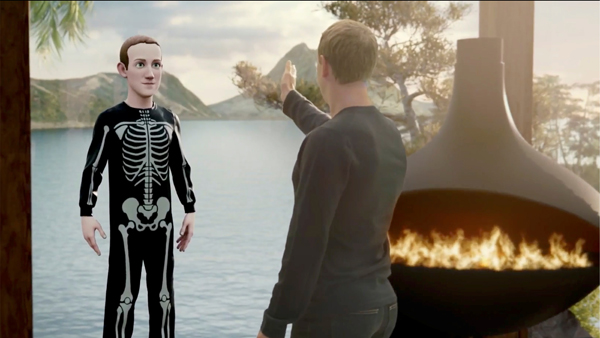 Business expansion to other areas?

Meanwhile, Bloomberg reports that the rebranded Facebook is working on a smartwatch, which is expected to launch next year.

Bloomberg also shared an image saying that an image of a smartwatch in development by Meta was leaked to the iPhone app.

If you look at this picture, the large screen resembles the style of an Apple Watch, and at the bottom of the front is the camera you see on a smartphone.

According to Bloomberg, cameras that are not yet available on Samsung or Apple Watch could be used for video conferencing.

A person quoted by Bloomberg said the meta plans to launch its first watch next year, with no final date set yet.

It also revealed that Meta is currently developing products for three generations with different release periods.

Meta also announced that it was developing a high-end ‘Project Kambria’ headset that mixed virtual reality and augmented reality (AR) while announcing the name change.

With the launch of the Meta smartwatch, competition with Apple is expected to intensify.

It is also known that Apple plans to launch its first VR / AR mixed helmet next year.

It seems that it will be a new advance for Facebook, or even for the meta, in crisis.