Skip to content
Enhanced account security with built-in password control, Google scheduled messaging, improved TalkBack screen reader, new hands-free Google Assistant capabilities, dark theme for Google Maps, and several new features in Android Auto. These are some of the news that Google has introduced in Android, its platform for mobile devices, announced by Hideaki Oshima, Android Product Manager, in a post on the company’s blog.

1. Account security with Password Checker on Android.
On Android, you can save passwords to your Google account to make it easier and faster to access applications and services using the “autofill. “When you open an application whose login credentials have been saved in your Google account, the system enters them automatically, which speeds up application access times and does not make it necessary to remember name memories Username and password Login credentials are one of the first lines of defense against intruders in online services, some of which may even contain sensitive information (think of your bank’s app, for example). For this reason, Google has decided to integrate the “Password Checker” tool on devices with Android 9 and later versions. Those who use the Chrome web browser may already know this. This function allows you to know if among the passwords saved in your Google account there are some that have been previously exposed by hackers subsequent breaches of the servers of the services to which they refer , with suggestions on what to do about it. updated id, when you enter a password in an app using Google Autofill, the credentials are automatically checked to see if they are on a list of known compromised passwords – passwords that have potentially already been stolen and posted on the web. If a match is found, Google will issue a warning and explain how you can change that password.

2. Google Messages allows you to write a text now and send it later.
Google said that more than 500 million people around the world use its Messages app to stay in touch with family, friends and other contacts each month. This is the default app for managing SMS on Android devices without the manufacturer’s custom UI, but anyone can download it from the Play Store and replace it with the manufacturer’s default. Google is starting to update its Messages app with the new feature that allows deferred sending of messages, available on phones with Android 7 and later. With scheduled sending, you can compose a message in advance and schedule it to be sent later. It works like this: type your message normally, then press and hold the send button to select a date and time when the app should send the message. The application will independently take care of sending the message at the previously scheduled time. 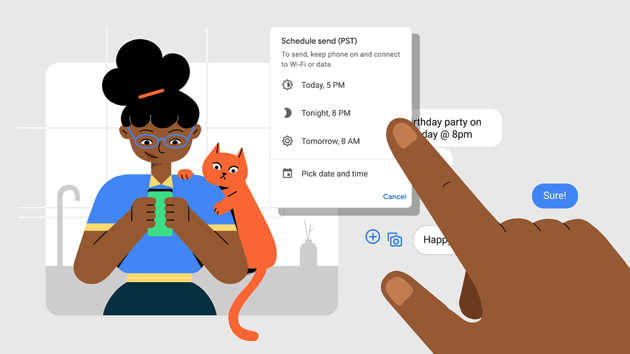 3. New TalkBack screen reader.
For those who are blind or have trouble seeing the screen, the new version 9.1 of TalkBack, the Android screen reader, is now available. Screen readers, like Android’s TalkBack, are the primary interface through which many other blind and visually impaired people read, write, email, share on social media, and do other things with an electronic device. TalkBack makes the screen speak loudly, allows you to navigate between applications, and facilitates communication with Braille, speech, and keyboard input. Now available, TalkBack 9.1 incorporates the features most requested by the blind and visually impaired community, including: more intuitive gestures, a unified menu, a new read control menu, and more. Available on Pixel and Samsung Galaxy devices (from One UI 3 and later), the new TalkBack offers more than a dozen easy-to-learn and easy-to-use multi-finger gestures. These gestures make it easier for you to interact with applications and allow you to perform common actions such as selecting and editing text, controlling multimedia content, and seeking help. For example, instead of navigating through various menus to start or stop music playback, you now only need to double-tap the screen with two fingers. Instead, just swipe up and to the right to use the new TalkBack voice commands; there are more than 25 different commands available. For example, you can say “search” to find the text on the screen, or “speed up the voice playback” to make the TalkBack voice speak faster. Additionally, support for two new languages ​​has been added to TalkBack’s braille keyboard: Arabic and Spanish. As Brian Kemler, Android Accessibility Product Manager, explained in a Google blog post, this new version of TalkBack is the result of collaboration with select testers and Samsung. Only with Samsung, Google intends to continue collaborating to improve TalkBack functionality, which is now the default screen reader on all Samsung Galaxy devices from One UI 3 and later.

See also  Engage in the 45 moment quiz! Currently 500 euros are at stake
San Francisco on Google Maps with dark theme

6. Android Auto updates to provide better driving.
The Android team has been working in recent months to improve Android Auto, the ‘travel’ version of Android. Among the new features are custom wallpapers, which allow you to choose from different car-inspired wallpapers to personalize the UI screen. Also, simple voice-operated games come to Android Auto, like “Jeopardy!”: You can start by saying “Ok Google, start a game” to discover the games available. Android Auto is also updated with shortcuts on the home screen, which provide convenient access to personal contacts and also allow you to use the Google Assistant to complete tasks like checking the weather or adjusting the thermostat remotely with the touch of a button. icon on the screen, just like you would on the phone. For cars with larger screens, the screen can be split to offer a real-time view of Google Maps on one side and multimedia controls on the other. Finally, you can set a screen to protect privacy when Android Auto is displayed on the car screen (ideal when transporting other people in the car). These Android Auto features will be available soon on phones running Android 6.0 or later and when connected to compatible cars.