With the arrival of new graphics cards RTX 30 Series for laptops, a new generation of computers for nomads is emerging, and ASUS decided to hit hard with his ROG Scar 17, a computer that therefore carries an RTX 3080 and a generally high-end configuration, which impresses on paper.

Aesthetically, ASUS wanted to innovate a bit with his ROG Scar 17, although the bonnet is still very classic, in a smooth matte black that bears the backlit logo of the range Republic of Gamerswhile half of the surface is covered in small, very inconspicuous, shiny black dots. This duality of textures is especially felt when the hood is opened, with two-thirds of the surface again in matt black (which keeps fingerprints, as usual), and a last third on the right and top with a slightly transparent plastic that exposes the components. As in the previous model, the manufacturer has placed an edge of LED strips around the bottom of the PC, to be configured (or deactivated) in the options. Like the clear coating, it’s five minutes of fun, but the user quickly forgets about it.

Connection side, we found on the right edge … absolutely nothing, except the small location for the Keystone, a small physical security key used to unlock a hidden partition on the hard drive. On the left edge, we find two USB 3.2 ports and a Jack 3.5 port, you need a traditional PC headphone adapter, and you have to turn towards the back of the computer to find a third USB 3.2 port, a USB Type-C ports. , HDMI and Ethernet and finally power. It is classic, it is adapted to modern virtual reality, but you should not accumulate too many devices or accessories in USB Type-A.

As for the keyboard, here is a real novelty, with an opto-mechanical model, quite unusual for a laptop. The typing feeling is pleasant, the keys offer a pleasant bounce and the click is present, the user can spammer Control however you see fit, and the keyboard is backlit, with separate LEDs under each key and presets in the software Armory box D ‘ASUS. And since this is a 17-inch PC, it hasa full numeric keypad, it is appreciable, even if the arrangement of several keys in non-traditional places disturbs at first. As for the touchpad, it is very classic, with a rectangular panel slightly offset to the left (designed for right-handed users therefore), with non-physical clicks. It’s accurate and fluid enough to surf the web, but to play games, you obviously need a mouse.

One more time, ASUS Hit the bid with the screen of this ROG Scar 17. As already indicated, it is a 17.3 ” model in Full HD (1920×1080), with an IPS anti-glare panel with technology Adaptive timing and the set is clocked at 360 Hz. The previous model went up to 300 Hz, which was already huge and of little use, but here the manufacturer goes very far, 360Hz refresh rate is hardly ever used, as we will see with video games. But before that, a quick word on the speakers, compatible Dolby Atmos and who offers a fairly well balanced sound, for a laptop, with very intense bass, that even feels in the chassis of the computer, without distorting the audio. This is appreciable, but for a better dive, you obviously need a helmet.

As you can see, nothing can harm this ROG Scar 17, all games tested here are set to max., even Red Dead Redemption II. Single Cyberpunk 2077 (in version 1.12) struggles to reach 60 fps with the RTX and options thoroughly, you need to narrow down some greedy settings to have a better frames per second, maintaining excellent visual quality. Nevertheless, Even with competitive games like Valorant, the 360Hz screen is never fully exploited., 300 Hz (or even 240 Hz) would have been more than enough.

Finally, a few words about PC warm-up and portability. Surprisingly, despite the great onboard setup, the ROG Scar 17 does not get too hot, the keyboard remains at a very acceptable temperature even after several hours of gaming, and the fans do not break the ears, unlike other models for players. Obviously, it is heard, but the sound of the ventilation is totally forgotten with the headphones on, and as soon as the game is closed, the PC resumes very quiet ventilation, making it versatile. Especially since the battery also withstands the road, with more than five hours of autonomy with Microsoft Edge open on Wi-Fi, and maximum brightness. For a pc player, it’s very good, and weighs about 2.7 kg, convenient to carry despite its size (logical for a 17-inch). 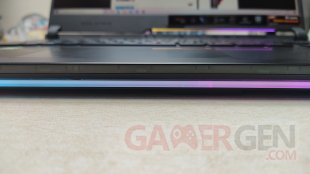 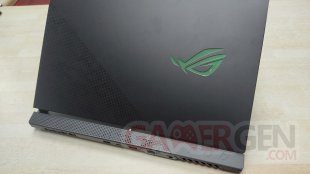 The ROG Scar 17, in this 2021 edition with an RTX 3080, is therefore little more than an evolution. This model seduced us even more than the previous version, in particular thanks to its greater autonomy and its much less cluttered speakers. Impressive on paper, the setup lives up to expectations and manages to run almost every game at a maximum of over 60 frames per second, but admittedly, the 360Hz display is still pretty superfluous. , a great figure on paper. that is very difficult to use.