Technology has been, as David Bowie predicted, an alien lifeform that has reshaped our world. If you took a random person from the 1920s and showed them 2022, they would likely believe that they had been transported hundreds, if not thousands, of years into the future. The infusion of technology into our lives hasn’t always been positive, but it’s done more good than harm. And when it comes to gaming, it has been nearly universally positive.

Here, we’ll take a look at just how technology has changed the gaming landscape and where it might go in the future.

There’s always been a social aspect to gaming. However, in the past, it was more of a “talk about your favorite game with your friends” kind of arrangement rather than one that you actively did together, except for those occasions when you could get together to play a multiplayer game.

Today, you can play against friends, family, or indeed strangers via the internet. The vast majority of games have multiplayer options, even those where you’re on your own mission. The most popular genre of game today is battle royale, which places you in a virtual world with thousands of other people — and that’s a concept that would have been unthinkable thirty years ago.

The Number and Range of Games

Gamers in the 1990s would be lucky to have more than a dozen games available to them. After all, games were either expensive or inaccessible; it would be difficult to play an arcade or casino game if you didn’t live near those types of establishments. As the web developed, so did the number of available games. In 2022, gamers can play demos of freshly-released games, play at a free online casino, or dive into classic arcade games, and all they need is their device and an internet connection.

Gaming As a Spectator Sport

Gaming has historically been something that you do for your own enjoyment, where you were an active participant in the activity. While that’s still broadly true today, another sector of gaming has popped up in recent years with huge success. No one could have envisioned that gaming would become a spectator sport, but that’s just what’s happened. People are happy to tune in to watch their favorite streamers play games, so much so that there are large, multi-million dollar eSports tournaments that draw spectators from all over the world. The future for this aspect of gaming looks bright, especially since large corporations are beginning to invest money. 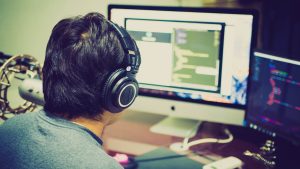 In the olden days, if you wanted to play a game, you’d have to pay for it. And that was rarely cheap. The online gaming world has introduced a new revenue structure; let people play the game for free and then charge for in-game purchases. This has been beneficial in multiple ways. First, it makes gaming more accessible — there’s little risk in trying a game for free. Second, it helps to provide game producers with an ongoing revenue stream, which allows them to invest further into the industry.

You could argue that we’re in the golden age of gaming. But experts think the future will be just as bright, if not brighter, than the present. The gaming industry is worth a lot of money, and they’re investing that money to make the future of gaming even better. In the coming decade, we’ll see a rise in VR and metaverse gaming, which will further strengthen an industry that has repeatedly shown itself to be on the cutting edge of future tech. There’s a lot to look forward to for gaming fans.