Like every year in the same period, the Italian study Milestone gives us a new game with our favorite championship. One year later – the correct one – MotoGP 20What does his successor have in store for us?

Not much, to say the least. Let’s start with the positives and changes first, because there are some of the same.

I) Physics and graphics

The physics of the game has changed and it will take some time to adjust. On Moto3 Y Moto2, the handling is quite easy but the MotoGP quickly gives a hard time. After a few hours of play, it becomes quite nice, without breaking the three legs of a duck.

The graphics are nice, but they can’t match other recently released racing games. The textures aren’t silly either (test done on XBOX ONE) and they won’t surprise you.

Long laps (or penalties for long laps in French) are FINALLY your appearance. In fact, it goes without saying that they have been in effect since beginning of the year 2019. Also, the physics change when you try to take a long lap, as does the view from the third-person camera. This will have the gift of irritating you the most after a few tries.

A new drop system is also appearing. The latter is quite original, you have to admit it. Simply put, when you fall, you can choose to pick up your motorcycle yourself, directing the driver. It could have been a good idea, except that the artificial intelligence reappears directly on your motorcycle! Functionality becomes unnecessary.

What was just cited are qualities, so wait!

The biggest problem with this game is the content. Apart from the poor career mode, which hardly changes from last year, you have nothing to do alone. Yes, there are always purchases online … and that’s it. Goodbye to historical mode, present last year when the game was released and in numerous releases from the same studio over the last decade. That said, the old man 500cc and others 990cc four-stroke – the same as in MotoGP 13, more or less – are modeled.

The MotoE, same as him Red Bull Rookies Cup they are not in the game on release day. The same goes for some Moto3 and Moto2 liveries, which won’t be available until June. It is inadmissible!

There are still no changes in the weather, while flag-to-flag races have been common since the end of the 2013 season.

There are many of them. For the past two years, Milestone has been working to sell a buggy $ 70 game. Motorcycles appearing on the track, improbable collisions or other collisions. You will need patience!

One of the big black spots. There are no group battles to deplore in Moto3, and crashes involving a dozen riders in each race. Some bots don’t mind getting off the track and don’t bother to get up if you try to overtake. A shame ! The game will surely be patched in the next few months (!) But in 2021, players shouldn’t have to go through this, even on “day one”.

See also  Horror on the Milan-Lecce educate: they uncover a charred body

A game to avoid, even if you are a fan of Grand Prix motorcycles. Wait a few months before starting, for the main errors to be corrected. If you absolutely want to start a career, insipid and impersonal at best, like last year, despite these warning lines, the game is available from 04/22/21, on consolesXBOX ONE, PS4 Y Nintendo switch) Y personal computer. 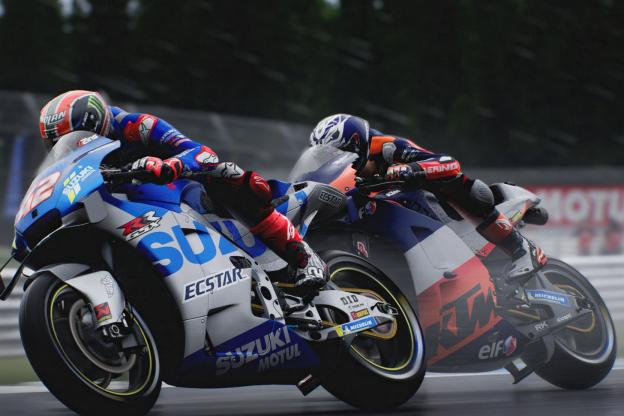