If you are parents of children under 5/6 years old, you should know the Peppa Pig cartoon. You may even have nightmares, under the influence of multiple confinements that require, from time to time, the help of Nickelodeon Junior. Well, you know that, from now on, these dear loved ones will also be able to deprive you of your console, thanks to the video game.

Since last Friday, October 22, 2021, MY FRIEND PEPPA PIG is available for PC and consoles. Inspired by the cartoon and produced by Outright Games, the software offers young players the opportunity to create their own adventure. Put the synopsis of the game, as well as the statement of the CEO of Outright Games: “We are delighted to bring the world of Peppa Pig to fans in this new adventure video game.” said Terry Malham, CEO of Outright Games. “It was exciting to produce a video game in association with Hasbro where each player becomes the main character in their own story while playing Peppa Pig. We are delighted that young children and their parents can play together while discovering all the interesting things that Peppa’s world has to offer. ”

Fans of the series can meet Peppa and other characters like Mum and Dad Pig, Suzy, Mr. Potato and many more in an interactive experience based on the story. Players can create and customize their own avatar, explore famous locations from the series, and participate in fun activities alongside PeppaPig herself. With simple controls, kids and their parents can get started in this single player game and its epic story.

Place, now, for the trailer. 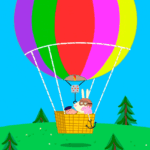 See also  On the lookout for an Apple iphone? You could want to wait around till September