However, Xiaomi is running a great deal from now until August 23. The deal gets you the Redmi 9 plus a free Mi Smart Band 4 for a discounted price of £149 (~$196). In other words, you save some scratch while simultaneously getting something for free. Not bad!

To grab that Redmi 9 deal before August 23, click here. Not interested in that or miss the deadline? Click below to grab the Redmi 9 on its own.

Original article, August 7, 2020 (05:47 AM ET): Xiaomi’s Redmi sub-brand focuses on entry-level and mid-range devices, and the Redmi 9 is the epitome of its quest. The Redmi 9 is aggressively priced at just $160 — give or take a few dollars. That’s seven or eight times less than a leading flagship device. The question is, do you get seven or eight times less of a smartphone? Or — to put it another way — what does $160 buy you and what’s missing?

Find out in the Android Authority Redmi 9 review.

About this Redmi 9 review: I spent a week testing the Redmi 9. The device was running MIUI Global 11.0.4, which is based on Android 10 with the June 2020 security patch installed.

Redmi 9 review: It’s all about price 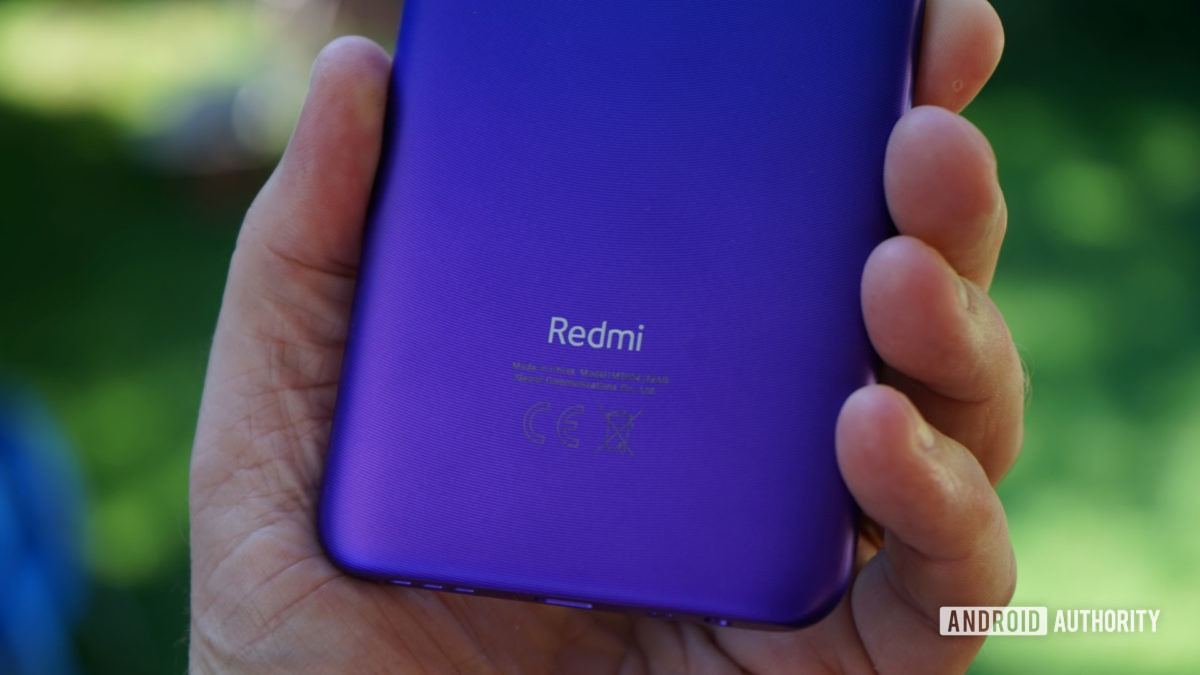 The Redmi 9 is the latest model in the vanilla Redmi series, which is the series that started the Redmi brand back in 2013. Price remains the key factor. However, that hasn’t stopped Xiaomi from including four camera sensors, a Full HD display, Corning Gorilla Glass 3, USB-C, quick charging, reverse charging, and an IR blaster on the Redmi 9.

To hit its low price point, the Redmi 9 will differ from more expensive devices when it comes to performance, RAM, and storage. The price also reflects the construction, with no fancy alloys, no chamfered edges, and no curved display. There’s lots of plastic and the overall feel is simple. However, that doesn’t mean the build is lacking in quality. The Redmi 9 feels sturdy. I always handled it with confidence, and never worried that it was about to split apart at the seams.

Taking into account the context, which is price and value for money, the Redmi 9 is surprisingly good. I must confess that I did groan a little when I heard I would be reviewing the device. However, having used the Redmi 9 for a while I must chastise myself for prejudging it. I wasn’t expecting such a pleasant experience from a $160 smartphone. Don’t misunderstand me. This isn’t a Samsung Galaxy S20 or a OnePlus 8. But if my budget was small and I was parting with my hard-earned cash, then I would be pleased with the Redmi 9.

The back of the phone is plastic, but Xiaomi turned this into a plus point. There is an interesting circular design around the camera module that Xiaomi says, “gives a sense of balance and elegance.” This actually isn’t a bad way to describe it. Kudos to the copywriter. The back is textured, which enhances the grip and prevents fingerprints.

The Redmi 9 comes in three colors: Carbon Grey, Ocean Green, and Sunset Purple. Each has a gradient design, reducing the blandness significantly.

The 6.53-inch FHD+ display has a 19.5:9 aspect ratio offering a screen resolution of 2,340 x 1,080. Brightness, colors, and viewing angles are all good. It’s possible to adjust the color temperature in the settings with “warm” and “cool” options alongside the default.

The Redmi 9 also supports sunlight mode, sometimes known as assertive display. When you step outside into strong sunlight, your phone will try to increase viewability by increasing the brightness. But screen brightness can only get you so far. With assertive display, the device is also able to increase the visibility of the darker areas, while stopping the already lighter areas from becoming washed-out. It’s a nice feature to have at this price point.

The Redmi 9 uses Xiaomi’s custom version of Android called MIUI. The device came with MIUI Global 11, which is based on Android 10. It includes the Google Play Store, Gmail, YouTube, Google Maps, Google Photos, and Google Assistant.

There are also some MIUI-specific apps like the Mi Browser, the Theme manager, Mi Calculator, the FM radio app, Mi Mover, and the Mi Remote app for the IR blaster. There are also some pre-installed games including Crazy Juicer, Dust Settle and Bubble Shooter with Friends. You can uninstall the games if need be.

One way Xiaomi is keeping the price low is by including adverts within MIUI itself, not just within apps. For example, when you install an app from the Play Store there is a high chance that you’ll see an advert on the final post-install screen. We’re not in love with this strategy.

Is the Redmi 9 any good for gaming? 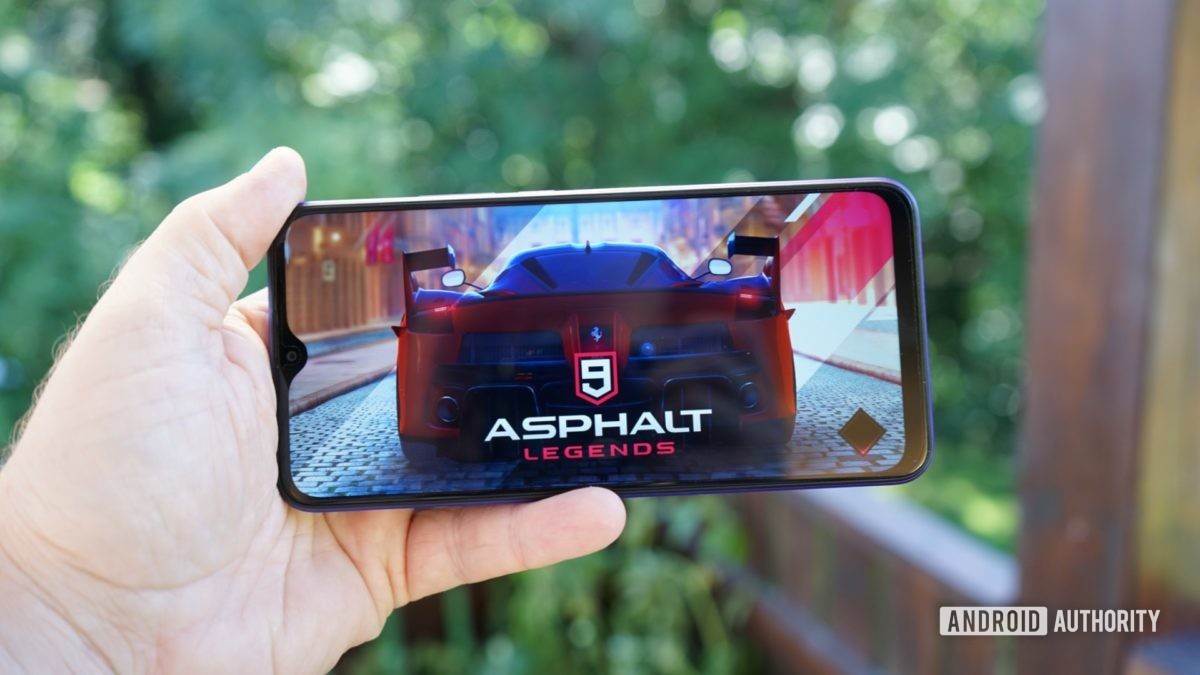 At the heart of the Redmi 9 is the MediaTek Helio G80 and either 3GB of RAM with 32GB of internal storage, or 4GB of RAM and 64GB of internal storage. The Helio G80 is an octa-core processor with 2 x 2.0GHz Cortex-A75 cores, 6 x 1.8GHz Cortex-A55 cores and a Mali-G52 MC2 GPU. For context, the Cortex-A75 was launched in 2017 and is the CPU core design used in processors like the Snapdragon 845, which is found in phones like the OnePlus 6.

Redmi 9 isn’t a gaming phone, but that doesn’t mean it can’t play games. I installed various casual games such as Temple Run 2, Star Wars: Galaxy of Heroes, and Brawl Stars, and they all played perfectly well. Upping the ante, I installed Asphalt 9 and Need For Speed: No Limits. Both were playable. However, I did notice the occasional lag in Asphalt 9.

Finally, I tried Fortnite and PUBG. Both were playable, but don’t expect high frame rates and detailed graphics. Fortnite doesn’t officially support the Redmi 9 and shows a warning when you start the game, however you’re allowed to play. Fortnite’s default settings for this device are 20fps with the low quality settings and the 3D resolution at 75%. PUBG ran well with the graphics set to balanced, the frame rate at medium, and without anti-aliasing.

I installed various casual games such as Temple Run 2, Star Wars: Galaxy of Heroes, and Brawl Stars, and they all played perfectly well.

As for audio, there’s a single speaker at the bottom next to the USB-C port. Sound is what you would expect from such a setup. It works, but the music can be thin and lacking in fidelity. It’s easy to overdrive the speaker; reducing the volume a little will improve the quality. There is also a headphone jack on the bottom edge. For both games and movies, using headphones will deliver a better experience.

Does it have good battery life? 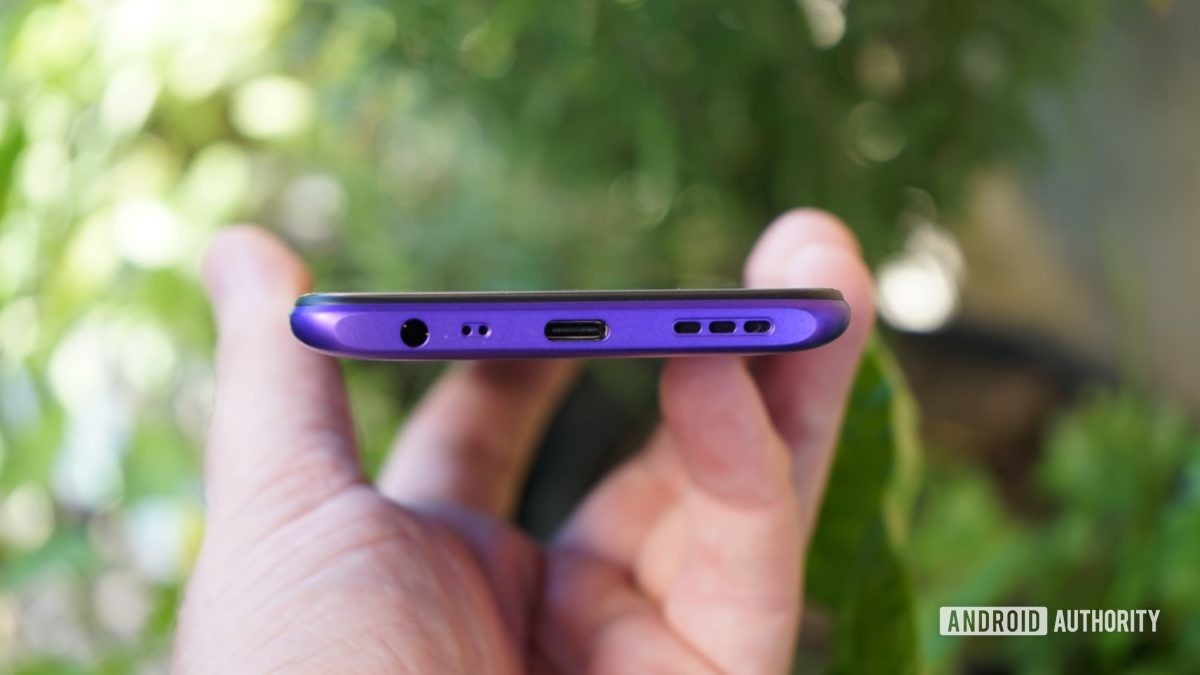 During my testing, I found that you can play around eight hours of 3D games or watch 14 hours of YouTube on one charge. That means you’ll get a full day out of the battery — probably more — depending on your usage.

The Redmi 9 also supports OTG reverse charging. With the right cable, USB-C to USB-C in my case, I was able to charge another Android phone. Quite handy in an emergency!

How is the Redmi 9’s camera? 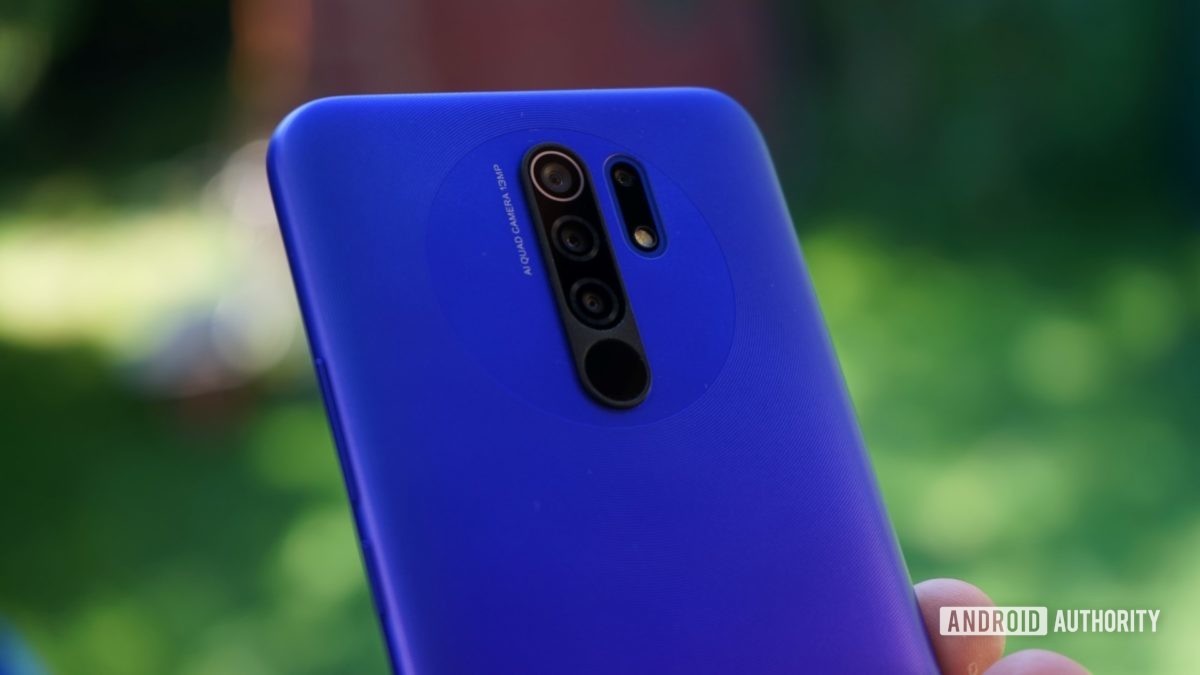 The Redmi 9 has a quad-camera setup, which is a big improvement over the Redmi 8. The main sensor is 13MP at f/2.2, it’s supported by an 8MP ultra-wide angle sensor, a 5MP macro sensor, and a 2MP depth sensor.

Overall, the camera is above average when you consider the price point. Portrait mode works well enough via the rear-facing camera, and pro mode gives you manual control over settings like ISO and white balance. The 8MP ultra-wide sensor is a nice addition and it’s great for landscapes. However, the wide-angle is fixed focus, which limits its use in some situations.

The camera app doesn’t include any kind of night mode, meaning you’ll need good lighting for the best results. Any attempts to take photos in low light will be noisy or unusable. Things are improved slightly by the built-in AI mode, which recognizes scenes like landscapes, food, and people. It also recognizes low-light situations and does its best to compensate. Overall, the low-light performance of the camera is bad.

To use the macro lens, you need to enable it in the camera menu. The main problem with the macro camera is that it lacks autofocus or any kind of focus assistant. This means that getting the subject in focus is hard. From the 15 or so images I took, there was only one in focus.

The device supports video at 30fps in 1080p or 720p. There are no other modes except for a slow-motion mode, which is limited to 720p and can be very noisy.

The front camera is a reasonable 8MP shooter. Portrait mode is available and works using face detection and computational photography since there is no front-facing depth sensor. That doesn’t mean the results are bad, but don’t expect the same quality as portrait shots using the rear camera. The front-facing camera also has a palm shutter mode, which triggers a timer when a palm is detected in the frame. It worked well the few times I used it.

Considering the value for money, the quad camera of the Redmi 9 is an overall plus point for the device.

Redmi 9 review: Should you buy it? 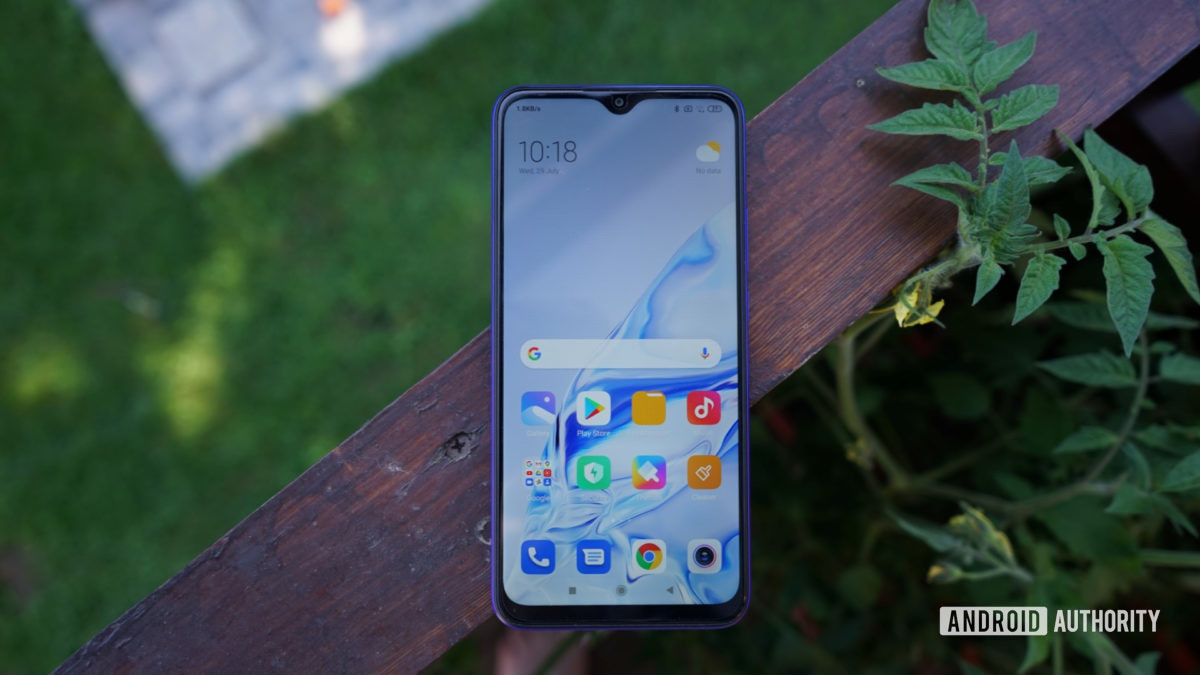 I don’t want to sound repetitive, but everything about the Redmi 9 has to be tempered by its price point. Is the design next generation? No. Does it have a fast processor? No. Can you play Fortnite at its highest settings? No. Does it have the best camera optics on the market? No.

What you do get is a usable smartphone with a 1080p display that has built-in sunlight mode and is protected by Corning Gorilla Glass 3. You get a quad-camera setup, including a depth sensor and some computational photography features. You also get a reliable fingerprint reader, the potential of 18W quick charging, OTG reverse charging, all-day battery life, Android 10, and access to the Google Play Store.

Of course, there are other budget-friendly phones out there, including the Moto G8 or Moto G8 Plus; something from Nokia such as the Nokia 4.2 or the Nokia 5.3; or even the Poco M2 Pro from Xiaomi itself. But if you are on a tight budget, the Redmi 9 is certainly worth considering.