The world of competitive gaming has come on leaps and bounds over the past several years. Now, rather than being a quirky side-show or niche interest, esports has finally begun to command the respect it deserves from the traditional sporting old guard.

Now sports fans are just as likely to make use of free bet offers, such as those provided by DraftKings through leading comparison platforms, to weigh in on the outcome of an esports event as they are to back their favorite side in the NFL play-offs.

And with so many new people coming into the sector, new titles are in the ascendancy, climbing the rankings of the most played competitive games in the world today. Below we’re going to take a look at which of these games can rightfully be called a top tier esport in 2022.

A genuine pop-culture phenomenon along the lines of Minecraft, Fortnite is among the most successful multiplayer games in history. It’s free to play format, anarchic battle royale gameplay and hilarious range of pop culture tie-ins and character costumes has made it a firm favorite among casual and esports gamers alike.

While Fortnite doesn’t command the viewer numbers it once did on the competitive circuit, it still ranks as one of the most enduringly engaging competitive games out there today.

Everyone’s favorite motorsport-soccer hybrid, Rocket League has gone from strength to strength since first going on release back in 2015. What’s more, since 2020, the title has been free to play across a host of platforms, and this has led to a meaningful resurgence in player numbers.

Rocket League’s blend of absurd arcade mechanics and a surprisingly high skill ceiling has made it an enduring esports favorite that succeeds in offering something unique in a space crowded with tactical shooters, MOBAs and battle royale titles.

Arena of Valor/Honor of Kings single handedly made the case for the MOBA genre’s inclusion on mobile platforms. In-so-doing it has successfully captured a growing market of strategic gaming fans, particularly in East Asia.

The key to AoV’s success is that it has eschewed the slow-paced gameplay of LoL in favor of snappy 5 to 15 minute long games, and has opted for a more accessible play-style with greater emphasis on character mechanics. This has not only made it the better choice for more casual gamers, but has led to AoV enjoying rapid growth since its international release in 2016.

Riot Games’ own take on the ‘hero shooter’ has quickly climbed the rankings to become among the most popular esports played today. This should come as no surprise given the studio’s impressive esports pedigree, yet few could have predicted that in just two short years VALORANT would become the most popular competitive title in this genre.

With a greater focus on rewarding accuracy and tactical awareness, this title has answered many of the criticisms skilled players level at rival title Overwatch, which instead presents a more lenient approach to twitch-based gunplay in favour of a greater emphasis on ‘hero mechanics’.

Without a doubt the highest grossing and most popular game franchise of the 21st century, the Call of Duty series single-handedly revolutionized the tactical FPS genre. With a greater emphasis on maneuverability and customization, Call of Duty has crafted a unique competitive title that is enjoyed across all platforms.

As such, it’s unsurprising that CoD’s competitive aspirations has seen it begin to gain ground on the esports old guard. Upcoming optimizations in Modern Warfare 2 are also tipped to further balance the competitive experience, offering a high potential skill-ceiling while remaining accessible to new players.

One of a new generation of mobile-optimized esports titles gunning for a seat at the top table, Free Fire has established a reputation for compelling battle-royale style gameplay cut from the cloth of PUBG. Among the most downloaded games on mobile today, Free Fire has quickly established an ardent fanbase.

In fact, 2021’s Free Fire World Series finals which was contested in Singapore attracted the single largest peak viewer number of any esports event before or since, with over 5 million people tuning in to catch the action.

Rest assured, Free Fire’s unstoppable rise could see it displacing the likes of PUBG as the premier battle royale before long. 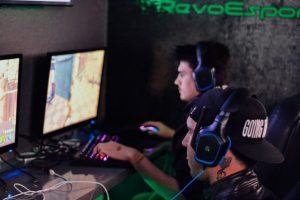 Originally a mod for Day-Z, which itself was a mod of ARMA 2, PUBG’s unassailable rise to the top flight of the esports world is a commendable feat. PUBG, which is now most popular in its mobile variant, PUBG Mobile, is often credited with devising the battle royale game format that we see put to great effect in titles as diverse as Fortnite and Call of Duty: Warzone.

While, in truth, PUBG didn’t invent the genre, it certainly made the case for how compelling and entertaining a giant, open world, last man standing bout can be and still successfully commands an impressive base of active players in diverse regions across the world today.

There’s no denying the fact that Riot Games’ League of Legends is the poster-boy for global esports. In crafting a more accessible experience than rival series Dota, League of Legends has captured the hearts and minds of a generation by making the Multiplayer Online Battle Arena genre as fun to watch as it is to play.

At present, there’s little out there that can rival the preeminence of League of Legends, and with a growing user-base of mobile gamers turning to spin-off Wild Rift for some Riot Games MOBA action on the go, LoL’s position, for the time being, remains secure.

Counter-Strike is arguably the longest lived tactical FPS series in the esports world, and has been a firm favourite among twitch shooters even since the original title went on general release back in the year 2000.

Counter-Strike: Global Offensive takes everything that is great about the core Counter-Strike formula and builds on it with an updated engine, some fleshed out game modes and some of the best balanced maps you’ll find in any multiplayer game. As such it should come as no surprise that CS:GO, at present, retains the crown as the tactical FPS par excellence in 2022.