The Acer Swift 5 (SF514-55T-71NL), equipped with the 11th generation Intel processor, has many advantages of a high-end notebook: a featherweight of just under one kilogram, a full-screen HD touchscreen, compatibility with WiFi 6, a Thunderbolt 4 port, incredible battery life, 512 GB SSD, etc. In short, at almost € 1,400 according to resellers, the consumer is entitled to expect flawless performance, and we must admit that we were able to observe very few weaknesses during our test.

When unpacking, the Swift 5 immediately stands out for its lightness (990 grams on the scale) and a very classic design, where its helmet is shared in greenish gray and shades of beige gold. 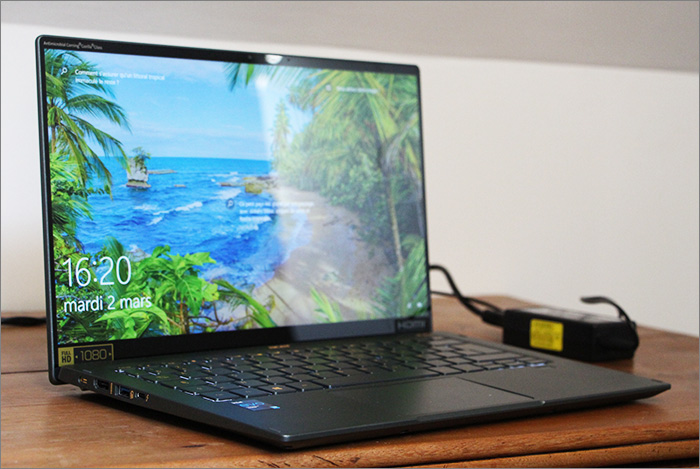 The ventilation openings are underneath and the assembly rests on four rubber pads. In our tests, the PC has a slight tendency to heat up on the left side, but the ventilation seems to do its job, without causing too much noise in return. 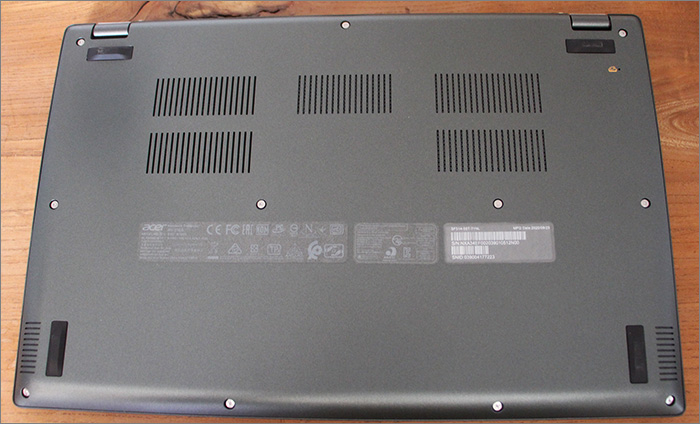 To connect to other devices, this Acer benefits, in addition to Thunderbolt 4, from two USB 3.2 Generation 1 inputs, one of which is capable of charging a device with the computer turned off, a 5V USB charger, a combined input jack of Audio. / micro and an HDMI 2.0 input. 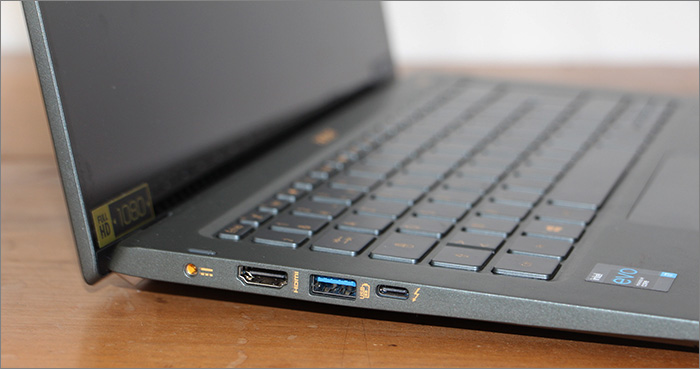 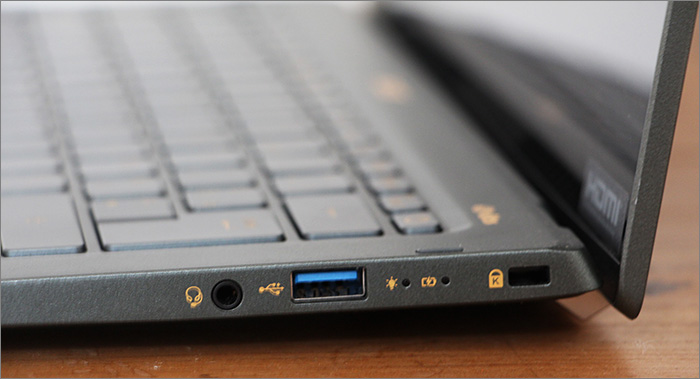 The keyboard can be a bit cramped – sometimes it’s hard to be sure that the key you just pressed is the one you were looking for. However, it is still quite comfortable to use once you get used to it and has a lot of shortcuts, without having a numeric keypad. Fortunately, these shortcuts don’t require you to press the FN key in order to use them. The backlight is turned on or off through one of them, but there is no trace of a multi-level setting. 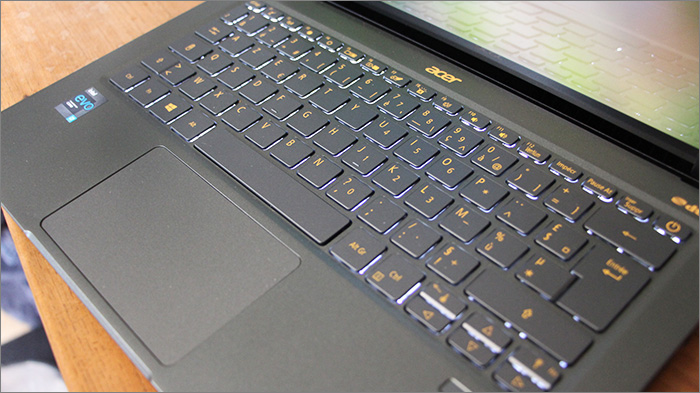 The Acer Swift 5 comes with a very nice 14-inch Full HD (1920 x 1080 pixels) touchscreen for surfing the Internet in relaxed mode. The glossy panel has the qualities of its disadvantages: in an outdoor environment, your eyes will tire more quickly due to the many reflections. On the other hand, in a relatively dark environment, watching series and movies is a real pleasure, because the colors stand out much better. In addition, there is a certain immersion, because the edges of the screen are ultra-thin, with a chassis / screen ratio of 90%. Enough to make room for an HD webcam. 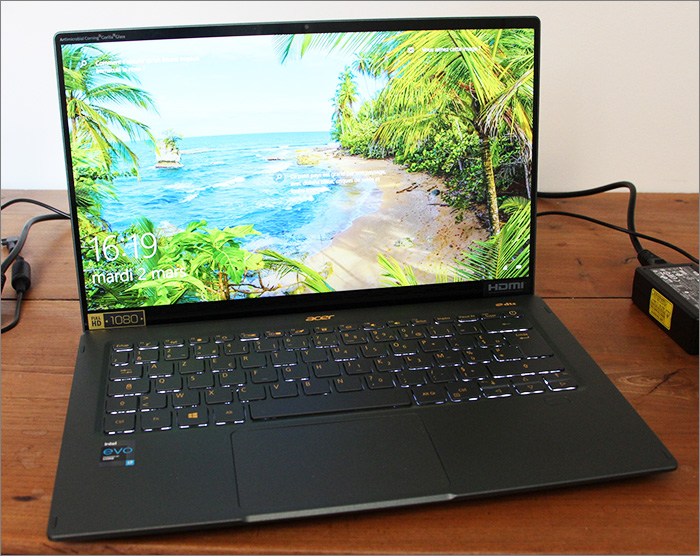 Acting on the date, even in the game

In use, the Acer Swift 5 is extremely pleasant to use. It offers fluidity at all times and a great capacity for response. It will hardly be pushed to the limit, even with three or four applications launched at the same time (of course, while remaining reasonable in such applications). Note that we have tested the version with 16GB of Ram, and that there is a version only equipped with 8GB. The impression of fluency is enhanced by the Windows Hello function that allows you to connect with a pressure of the thumb on the fingerprint detector.

Among the few machine glitches, there is some software we could avoid putting on PCs, like a link to the Booking site in the toolbar … or even Norton and a Dropbox subscription offered, but nothing too intrusive after a few minutes of cleaning. You can also rely on Acer Care Center, a management software provided by the manufacturer. It allows you to perform updates and checks on the status of the battery, SSD and memory. 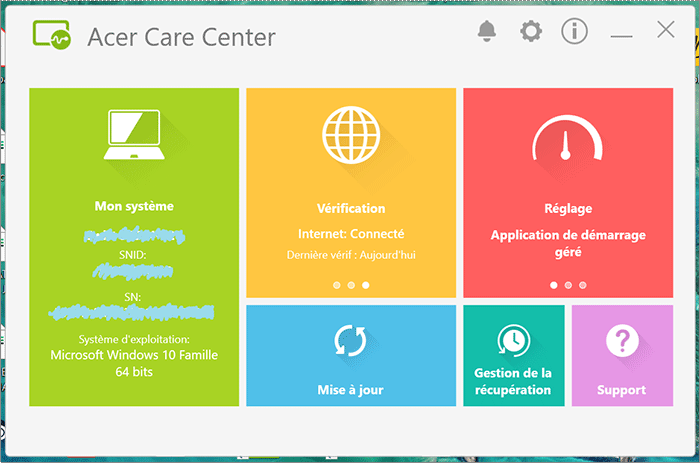 Put to the test, the Acer Swift 5 comes out comfortably, with a Novabench score of 2,186, slightly below the Dell XPS 13 9310, a much more expensive 13-inch computer, which nonetheless has the same Intel Core i7-1165G7 processor. . With Geekbench, we get 1539 on single engine and 5859 on multicore. Still on Geekbench, it got an excellent score of 18,479, which makes you want to release some games to put it to the test.

After checking, you can run a good chunk of your game library in Full HD, which, for a PC without a graphics card, is still an advantage. By what magic is this possible? The integrated graphics processor, Intel Iris Xe Graphics, is no stranger to this feat. In low poly 3D games (with poorly detailed textures) like Valheim, Risk of Rain 2, Fall Guys, it flirts with 60 frames per second (IPS). Even in The Witcher 3, a slightly aged but still graphically demanding title, it manages to show everything with a medium level of detail, but with some fluidity (30/40 IPS).

We still haven’t mentioned the biggest strength of this laptop: the gigantic battery life. As usual in CNET France, here you are connected to Wifi, brightness at 50% and sound at 40%, direction Microsoft Edge to launch Casa de Papel on Netflix, until the battery runs out.

Rather, it was she who failed to exhaust us: it was only after 3:44 p.m. in the robbery in a red suit that she came out, placing it at the top of our ranking of best autonomy, ahead of the Lenovo Yoga Slim 7, which had been held at almost 2:30 pm In addition, the Fast Charge solution allows in 30 minutes of connection to reach 4 hours 30 minutes of autonomy.

For a little less in 14-inch format, but also less autonomous, we can be tempted by Huawei’s Matebook 14, with a definition of 2160 x 1440 pixels. Another option, more expensive but with more options, such as an infrared camera and Full HD + definition, could turn to the Dell XPS 13 2021.

In the end, this Acer Swift 5 has managed to forget its small non-paralyzing flaws such as its modest connectivity or its minimalist, mandatory 14-inch keyboard, to highlight the main qualities that one expects from a laptop of this size. It surprises in the first place with a featherweight and a design that allows us to consider taking it everywhere.

On the other hand, this is not done to the detriment of performance, or its equipment, which allowed it to obtain the Evo d’Intel certification. The icing on the cake, not only does it offer a decent range, it simply shows the best performance measured on our latest tested models.