The game Cyberpunk 2077 It’s been talked about for a long time since its launch. Between records and setbacks, supporters and detractors, the game makes the headlines of all the media. The question of game refund had been raised by the CD Projekt Red studio itself, then configured by Sony once the game has been removed from the PlayStore. Today, the consequences of these refunds some internet users are still not satisfied.

Dec. 18, we learned that the game Cyberpunk 2077 I had has been removed from PlayStoreand that Sony Interactive Entertainment would begin to “offer a full refund“to all the players who wish it.

In spite of Refund conditions They were pretty chaotic before Sony’s announcement, they’ve been more fluid since then. For Steam, GOG and Epic Games players, you just have to fill out a form (which only works if you have played less than 2 hours within 14 days of purchase for Steam and Epic Games, and within 30 days for GOG). To get a refund for a digital copy PS4 and PS5, you have to submit a request to PlayStation, and this results in inevitably an elimination from the game once the refund has been made, something some players really don’t like, who would have liked to get the butter and butter money.

Some Internet users have expresses dissatisfaction on social media after finding out that once the return is made, the game Cyberpunk 2077 disappeared from his library :

See also  The inside tip among YouTube downloaders: You can use it to load videos and music at high speed

Some people are really mad that Microsoft and Sony will remove your access to Cyberpunk when you request a refund. They want to keep the game and also get a refund. pic.twitter.com/eBiFJzv7Ur

I just got my refund from Cyberpunk, but now are you going to remove it from my console ???? I still want to play the game !!! You scammed the world by allowing the release and sale of a game on your console that doesn’t work and won’t work for months!

Comment from the user who took the tweet. : Some people are really mad that Microsoft and Sony are removing their access to Cyberpunk when requesting a refund. They want to keep the game and receive a refund. 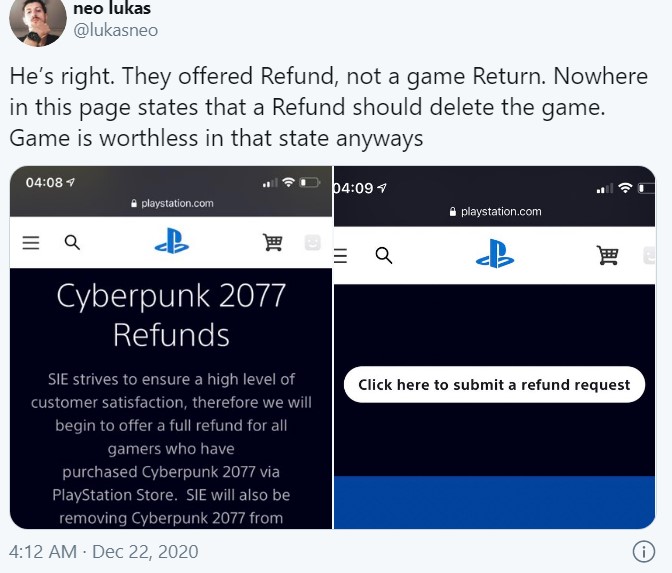 Is right. They offered a refund, not a return set.. Nowhere on this page does it say that a refund should remove the game. The game is worthless in this state anyway.

Other Internet users, on the other hand, took the opportunity to criticize those who thought they would continue playing Cyberpunk after being reimbursed:

Currently laughing at the losers who areI did not get refund from Cyberpunk2077 and you still wanted to play.

He’s the kind of guy who will eat all of his food and then say he didn’t like it and you want your money back.