The Intrepid studio officially releases Ashes of Creation’s Alpha One (without NDA), with the aim of testing the main features of the MMORPG, although testers should expect some bugs.

For several months, the MMORPG Ashes of creation is subject to more or less formal tests (internal tests, prealpha, discovery sessions for influencers, etc.), but the “Alpha One” is now officially launched: the test servers will remain open for a full month (until August 13) and the testers are not subject to any confidentiality clause (NDA). In other words, testers will be able to freely share their opinions and play sessions, while onlookers should quickly find something to quench their curiosity. 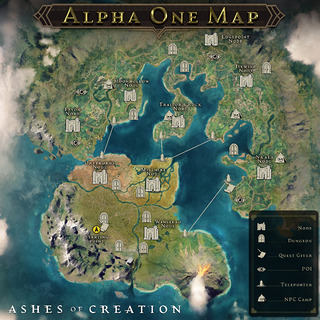 But already, these tests are meant to test several of the basic mechanics, but also some of the original Ashes of Creation systems. In bulk, the developer relies on this alpha to test server deployment and performance, character management and character races, (new) combat systems and hero progression, operation of the economy managed by the players or the first sieges and raids of bosses – in addition to the traditional generation systems, mounts, groups, guild (with its progression and hierarchy) or even reward balance.
The study adds the system of nodes, this mechanism that consists of “progressing” the different areas of the game world, gaining levels according to the activity of the players in the place, and that little by little transforms a camp into a village, then into a city and finally into a metropolis, while unlocking new features in each stage. And as a corollary, testers will also be able to discover the merchant caravan system (transporting resources from one point to another in the game world, at the risk of being looted by an opposing faction).

See also  The ORIGINAL voice of BO but in ITALIAN is CRAZY! • Brawl Stars Italy

We understand, this first phase ofalpha test aims to bring the game world to life for a month and verify that its behavior meets the expectations of the development team and players.
As a reminder, this alpha is available to contributors to the Ashes of Creation crowdfunding campaign, holders of the appropriate bundle (currently sold for a whopping $ 500), as well as players who have received an invite as part. of the various distributions. organized in particular on social media.