Unlike all other media, games have a special feature: they make complex stories and problems tangible. These can only be developed if the players themselves are activated using the mechanics of the game: they become an important part of the medium. This, in turn, makes the games even more interesting for political education work. In serious games, for example, knowledge is imparted in a consciously creative way, which is gradually acquired by the players themselves. This allows special access to serious topics as well as historical and political events. The motivation to deal with this content is significantly higher because it is presented in the form of a game. Because the person playing the game makes their own decisions within the game, for example, actions are more permanently remembered as an experience.

To illustrate how serious games, which deal with the big topic of right-wing extremism, can be used in practice, let’s first take a look at the following three games.

“Through the Darkest of Times”

In this historical strategy game from the developer paint pot games resistance against National Socialism during the Third Reich becomes the theme. The player:der coordinates a civil resistance group in Berlin, fights for freedom and wants to weaken the system.

This mobile game from the Anne Frank educational institution is dedicated, among other things, to right-wing radicalization on the Internet. The: The player sees a social media environment, chats with people, looks at profiles, and reacts to stories, just like her: you probably know it from her everyday life. The objective is to find out how radical groups act and what you can do if someone in your own environment becomes radicalized. The Anne Frank Educational Center provides complementary material for use in the classroom.

See also  Free apps for iOS and Android: these downloads are currently free

In this simulation game by Lucas Pope, the player takes on the role of an inspector at a border crossing in the fictional state of Arstotzka in 1982. He has to follow the laws of the government and decide which immigrants are allowed to cross the border. and which ones don’t. As a result, the player is faced with playful, ethical and moral challenges.

In their own way, all three games create insights into politically and socially relevant issues in the field of right-wing extremism, both with aspects of the past being processed, and with insights into the present and possible resulting future. In this way, they show how important it is to deal with these issues at this time. For example, “Hidden Codes” uses the messenger aspect most young people are familiar with on their own smartphones to make clear the ease with which far-right slogans and symbols can be spread. By playing, you can recognize the dangers for yourself and bring what you have learned into your own reality, into your own chat history. Here too there is an opportunity to ask within the educational work if a person has already had experience with such news, to return to the topic of media competence and discuss recommendations for action. “Hidden Codes” is particularly suitable for talking to young people about far-right codes and symbols. The game “Papers, please!” deals with the issues of flight and migration.

Practical use in political education work

For political education work, this means in concrete terms that the three games presented are a good starting point for educating and discussing the topic of right-wing extremism. With a view to practice, the main focus below should be on school lessons as a possible place of application, but this approach is also possible in other areas, such as work in youth clubs, associations and workshops.

First, teachers should consider games as a stand-alone medium that is a good complement to the movies and books that are commonly used. Depending on what knowledge is to be transmitted and what discussions are to be held, it is advisable to choose one of the games. This could be played by students on site first, if the school’s technology allows.

If this is not possible, public videos such as the trailer or “Let’s Play” can be used to get an impression of the game, its message and its “feel”. At this point, the goal is not necessarily to play the entire game, but to get an idea, take a closer look at the different sections, talk about them, and reflect.

To reflect, it is important not only to play the game, but also to set tasks at the same time. What exactly is to be considered or analysed? What aspects should players work on? Exactly those questions can be noted on a worksheet from the start: students can answer them alone or with others while playing and writing down their thoughts.

Then it is important to comment on what was experienced in the game or what was seen in the video. Using “Papers, please!” As an example, these could be questions and discussion topics:

Precisely this comparison of game and reality is particularly exciting, as it can be linked to current events that have played a role in news reports, for example.

More ideas for games in the classroom

This text is an excerpt from the brochure: 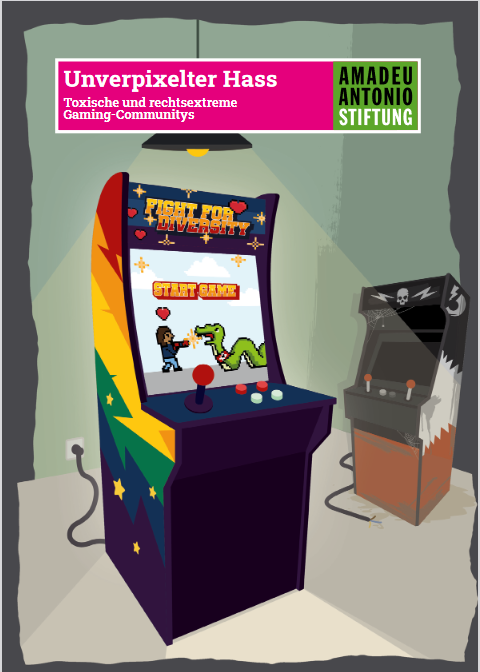