Of cloud computing provider shade has been offering a power update since the end of October, which brings virtual PCs with higher performance. We tested the service and used everyday apps and games on a Windows PC RTX-A4500 tried


The energy upgrade includes a AMD Epyc 7543P processor with quad cores, 16 GB of RAM and an Nvidia GeForce RTX A4500 GPU. The graphics chip is more or less comparable to an RTX 3070. In order to access the virtualized environment of Windows, an application provided by Shadow must first be downloaded. Windows 10 Build 19044 is installed on the server.

Since the virtual computer only runs when it is actually being used, Shadow must be started after opening the application. Usually this only takes a few seconds, but in some cases it only takes less than a minute. When the stream ends, the user is notified that Shadow will shut down after 10 minutes if they don’t log back in. After a long period of inactivity, the stream will be closed.
Shadow cloud gaming service provides full Windows PC

While many game streaming providers only offer games in the cloud and transfer them to the user’s device, Shadow provides a full Windows interface. Therefore, all applications such as Steam must be installed by yourself. Titles must be purchased in the normal way. So it’s not a gaming flat rate, but a virtual PC in the cloud. The advantage is that the user can use any application on his Shadow. Therefore, the service can be used not only for gaming, but also for video editing, for example.

The virtual PC is connected to a gigabit line, so download speeds of around 985 megabits per second and upload speeds of almost 106 Mbit/s are achieved in the speed test. This allows you to download updates, games, videos and other content in a short time. In practice, the data rate is usually limited by the server of the corresponding service. A Steam game was downloaded at an average speed of 500 Mbit/s. Still a 30 gigabyte title was installed in less than ten minutes.

By default, users have 256 gigabytes of available storage space. In the test, we were able to access an additional partition with 256 GB more memory. The space can be expanded in increments of 256 GB for 2.99 EUR per month. A maximum of five terabytes is possible. How well Shadow works in practice mostly depends on your own Internet connection. If content is to be streamed with high resolution, low artifacts, and low latency, at least 30 to 40 Mbit/s should be reserved. However, it is still possible to control the virtual PC even if the speed is reduced to 10 Mbit/s.

For gamers, the latency between the local computer and Shadow plays a crucial role. Since we used a DSL connection in the test, the latency was just under 30 milliseconds. There was no significant additional delay caused by the app. Of course, latency has had a corresponding impact on response tests. Although there is input lag depending on the line used, the advantage in online gaming is that the service itself is well connected and the latencies between Shadow and the multiplayer server are in the single digit millisecond range. 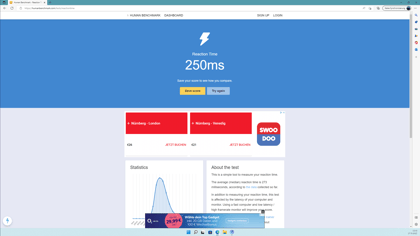 Response test on a local PC 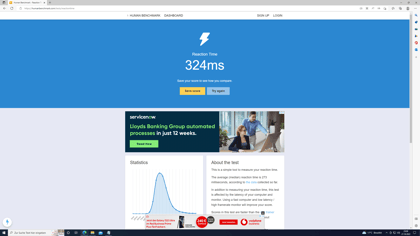 Can be operated via smartphone app

In addition to the desktop client, there is also a smartphone app that can be used to control the Shadow on the go. The app has a virtual controller so games can be streamed as well. However, the controller is not recognized by all games and it was often necessary to reset the connection for the controller to work properly. While streaming on the WLAN worked just as well as on PC, the latencies on the 4G network were too high for gaming. This could be mainly due to high network utilization at the time. A device with a 5G modem is recommended for mobile use.

In the desktop version and in the smartphone app, the shadow client has an options menu where various settings can be configured. In addition to codec changes, color enhancement, and frame rate limiting, you can adjust audio quality, transmission protocol (TCP or UDP), and maximum bitrate. By default, a reasonable maximum bitrate is automatically set. Bit rates between one and 70 megabits per second are possible. USB devices can be forwarded directly with low ping as if they were physically connected to the server. This requires the installation of a driver.

We tried different games like “Biomutant”, “Counter-Strike: Global Offensive”, “Train Sim World 3” and “Minecraft” during the test. All titles were smoothly playable at maximum graphics settings. There were occasional micro stutters when playing the game, which could be fatal at the wrong time, especially in shooters. If you have a fiber optic connection, you shouldn’t have any problems here. We have not tested compatibility with VR glasses.

While the standard subscription costs EUR 29.99 per month, the power upgrade costs EUR 14.99 per month. If you already have a gigabit line and just want to use the service to play games on your PC, you should be able to get away with buying the right hardware in the long run. However, the power upgrade should be worth it if your internet connection isn’t that fast, you want to gamble on your smartphone on the go, or you can’t afford to spend several thousand bucks on comparable components.