Fight huge monsters, which you then free from certain body parts to build new equipment to kill even bigger monsters – that’s the cycle in the so-called hunter genre. Here your characters are not strengthened by leveling up like in other RPGs, but only through equipment. The Monster Hunter franchise has always been the top dog here. Everyone is even more excited when a new challenger enters the arena, in this case it is “Wild Hearts”.

The Witcher 4: Start of a longer series!

The new game from Omega Force, a development studio owned by Koei Tecmo best known for the Dynasty Warrior series, is not a mere sequel to their first attempt at the Toukiden Kiwami genre. After all, this produced two games, but probably didn’t get the desired number of players. Instead, “Wild Hearts” should be something completely new and different.

By the way, not monsters are hunted here, but “Kemono”. They resemble animals, but they are mystical beings that harbor the power of nature. The hunt takes place in one of four areas that have been designed according to the seasons. You always return to the central city of Minato, for example, to process your loot and plan your next trip.

What distinguishes “Wild Hearts” from other hunting games are the so-called Karakuris. These are special gadgets that only certain hunters, including you, can use. They can be used in many ways: they can create little resting spots, help you get to tricky places with a zip line, for example, or hit the Kemono on the head like a hammer.

The Karakuris will be the core element of the game that sets Wild Hearts apart from other hunting games. Consequently, the fun of the game will also depend on how creative you can handle it. There will be a variety of tools to choose from, the new Karakuris will want to be crafted just like the weapons. They also offer a variety of possible combinations if you’re hunting with multiple players. 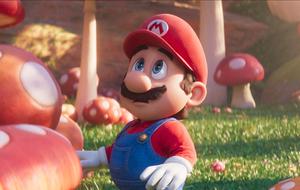 Super Mario Bros.: First trailer for the video game adaptation from the creators of “Minions”!

It was a surprise when Nintendo and… Read more “

Because “Wild Hearts” is, like all other hunting games, a multiplayer title. Up to two other hunters can help you kill the kemono with one of eight types of weapons and their karakuri. But that also means that the fight becomes more difficult, because the level of difficulty increases with the number of players.

Whether all of this is enough to really topple “Monster Hunter” from the throne of the genre is questionable. But Omega Force seems to have learned from the “Kiwami” series and provides “Wild Hearts” with enough tricks and charm of their own to at least play up front. From February 17, 2023, players can see for themselves. The game will then be released for PS5, Xbox Series X/S, and PC.

To tell this story, our editorial team has a youtube content
selected and added at this point in the article. Before displaying this content, we need your consent. You can revoke your consent at any time, for example via the data protection manager. The legality of the treatment carried out until the new revocation will not be affected.