microsoft founder bill gates published a copy of his CV, which he sent out for job applications in 1974, a year before the founding of today’s world-famous software company. The contemporary document contains some surprising details.


Bill Gates himself recently published his 1974 CV on the Microsoft belonging LinkedIn Business Network. There was a typical dry comment from Gates: “Whether he’s finished school or dropped out of college, I’m sure his résumé looks a lot better than mine did 48 years ago.”
Bill Gates’ 1974 Resume: Good Programmer, High Salary

One cannot be so sure about this statement, after all, Bill Gates was studying at the elite US university Harvard at the time and was able to show some experience in programming and computers as early as 1974, which was probably much less common then than it is today.

It’s unlikely that most applicants today would have developed a program to create a schedule at their high school and raised $10,000 for it. A cooperation with Microsoft co-founder Paul Allen, in whose context the software for the analysis of traffic flows was written, is equally rare. Working with mainframes is also likely to appear on very few resumes of people under the age of 20 today.

Gates had just arrived at Harvard when he wrote the now-published résumé and already then stated his monthly income was $12,000, which, adjusted for inflation, is a good $71,000 in today’s terms. It is also interesting that Gates even stated his weight as only around 59 kilograms with a height of 1.78 meters in his CV.
Infographic: Bill Gates – The Life of the Founder of Microsoft 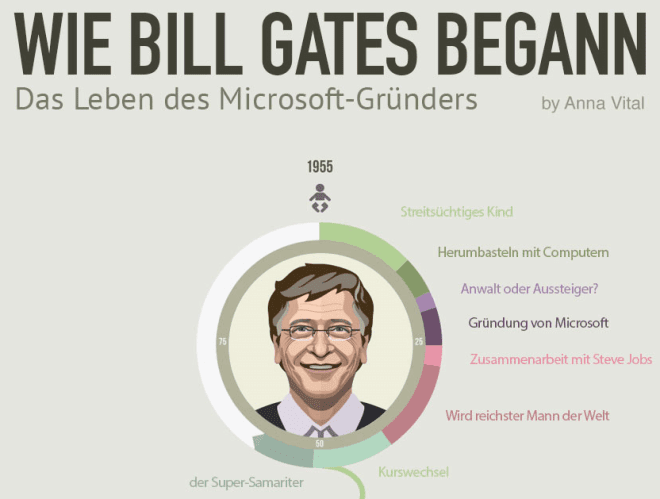